Mãn alive: A novel of food, fulfillment and family in Vietnam 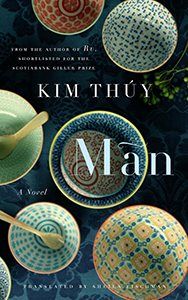 This slim, wondrous book tells a story of love, food, passion and life rooted between worlds. Many chapters are no longer than a paragraph; the longest run two pages. Reading it can feel like reading long-form haiku; pauses are required to contemplate its powerful poetic detail.

The book’s narrator and protagonist, Mãn, born and raised in war-ravaged Vietnam, is the self-described child of three mothers: her birth mother, the nun who found her and her Maman, a valiant character who raises her and finds Mãn stability, if not love, in a marriage with a lonely Montreal restaurateur. He courts the young woman with gifts of a fan, shampoo and maple cookies.

Mãn’s life in Canada with her husband, with whom she has two children, is bound by duty, not happiness. But she does find different routes to joy, first via her friend Julie, “a merchant of happiness,” who becomes her business partner in a culinary lab devoted to fusing French and Vietnamese tastes and traditions. Mãn’s talents eventually take her to Paris where she meets Luc, a married chef with whom she embarks on a life-redefining affair.

Nearly every page of this story, which shifts in time and place, references food—the making of it, its capacity to heal, its role in evoking memory and continuing traditions, how it can be elevated to art itself. Mãn speaks of the crepes of her childhood, cream transformed into “thin, translucent skin” her Maman would pull off the griddle with a bamboo stalk. She cuts into a banana cake she makes, describing “the crimson of the bananas embarrassed at being caught in the act.” Food is also marshalled as metaphor to describe a co-worker: “His good humour burst out of his stomach like popcorn.”

Mãn, translated from the French by Sheila Fischman, is Thúy’s second novel; her first, the acclaimed Ru, was also based on her own journey from Saigon to Montreal. Each chapter of Mãn is titled with a Vietnamese word and its translation, a melding of Mãn’s then and now. Her name, the reader learns, means “perfect fulfilment.” It’s a descriptor that rings hollow when Mãn begins, but hauntingly true at its end.