Margaret Atwood: How technology is reviving old styles of storytelling

As Amazon's giant audio division Audible launches in Canada, Atwood explains her involvement, and what it means for storytelling in this country 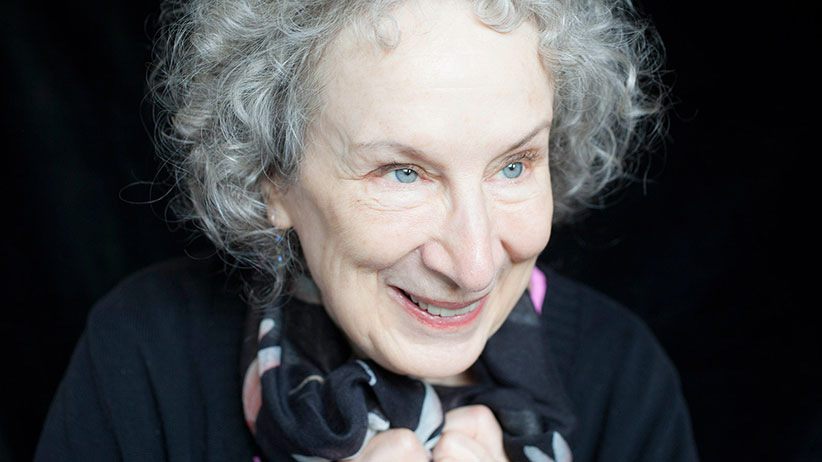 Canada’s iconic mistress of print, novelist Margaret Atwood, is suddenly deeply immersed in other storytelling forms. The TV version of her 1985 novel, The Handmaid’s Tale, which seems to many progressives eerily prescient of Trumpian times, has been renewed for a second season, while a six-part adaptation of Alias Grace—arguably Atwood’s finest novel—begins on CBC TV Sept. 25. And on Wednesday both Atwood and Handmaid star Elizabeth Moss are scheduled to appear at Union Station, Toronto’s transit hub, to attend a 30-minute live “performance” of the novel and Amazon’s powerhouse audio division Audible announce its expansion into Canada, with a copy of The Handmaid Tale’s audio version offered free to subscribers for the next month. Earlier, Atwood spoke about the contemporary media universe—and how it reminded her of a far older storytelling world.

Q: As a self-confessed technopeasant, which you of the long pen are not, I have to ask you to explain the significance of Audible.ca. Are you not available on audio in Canada already?

A: Oh please. We are all technopeasants. We’ve just mastered the little corners that are useful to us.

Q: For a novelist, though, you are currently all over TV.

A: That’s thanks to streaming services, which mean there’s now a format suitable for handling long novels. You know I was in both Handmaid and Alias? In the cameo for Alias Grace I played someone actually known in the script as Disapproving Woman.

Q: Where did you film?

A: At Black Creek Pioneer Village [in Toronto] and it was supposed to be a morning scene but in fact we got behind. So it was not filmed until night and they had to put a big floodlight through the window, which made it even hotter. There were all these people in Dickensian garb in 90-degree heat fanning themselves and expiring.

MORE: Audible’s founder and CEO speaks about his huge plans for Canada

Q: But to return to audio, what is new about Audible.ca?

A: One thing is that they’re doing Quebec literature, which has never had an audio platform. Also, some of my works are available on audio here but some are only available on audio in the United States. So Audible is taking things that they already had in their library—Canadian and non-Canadian—that weren’t available here before. The other thing that’s new is they’re making their own original programs, instead of just using what publishers had already released. Handmaid’s Tale, the Claire Danes recording, is one of those they made themselves. And Audible is making an audio book of my Angel Catbird graphic series.

Q: How do you do audio of graphics?

Q: I have seen [Audible CEO Don] Katz quoted as saying he’s probably the biggest employer of actors in New York. Do you think the expansion here will make more work for Canadian actors?

A: There’s no question, both as readers of audiobooks and as actors in the kind of thing I just described. They’ll all have to have a good voice to sound like people who are part cat, bat, vampire or rat and mice and so on.

Q: You put me in mind of a lovely line from a Rose Macaulay novel from the 1950s, The Towers of Trebizond, where two people have a conversation about someone who has failed in his attempt to swim across the Dardanelles: “adopting the voice one uses when discussing a friend who has been eaten by a shark.” That kind of voice?

A: That is exactly the kind of voice acting we are looking for: adopting the voice of someone who has just swallowed a rat and actually finds it kind of delicious but at the same time disgusting, or someone who has just found out he is part bird and part cat and is flying around. Someone who looks in the kitchen, decides he hates vegetables but wouldn’t mind some of that cat kibble.

Q: What do you like best about audio and Audible in particular?

A: I’ve known Don for a while. This thing he invented back in the 90s you can see in a glass case in New Jersey. It looks much like what an iPod would later. He thought you would put it on your desk or on your bedside table or something, and then he realized that a lot of his audience was going to be people stuck in their cars. Now of course you call it up on your smartphone. The main point is that people who have hands-on tasks or maybe can’t see very well love to be read to. So back again to the old radio days, when there were plenty of plays and books at bedtime. After the war, the comics came roaring back and you got things like Green Lantern, same thing as Angel Catbird.

Q: I remember Ted Rogers saying that radio will never die, that the familiar voice in the dark really connects with us.

A: It gives you Richard Burton reading “The Rime of the Ancient Mariner.” None better, but you wouldn’t necessarily watch that. It’s a voice thing. Remember where storytelling started—around the campfire in the dark. All writing, except numbers, is just a score for voice. I spent a lot of time reading aloud to children. And indeed I was read to. I think that if we’re lucky enough to have had people read to us as children, that’s where we connect with stories. We read to my mother who went blind at 90. She did listen to the radio but she didn’t want people she didn’t know reading to her.

Q: She wanted the familiar voice.

A: Yeah, and I don’t think she was much listening to the content. Believe it or not, Agatha Christie works quite well as audio. My mother’s friend Marguerite used to read to her and [my mother] once said to me, “Tonight we started another Christie mystery.” I said, “That’s great.” And, she continued, “Someone got murdered.” “Man or woman?” I asked, and she said, “One or the other.” I don’t think she was following the plot really carefully.

Q: One thing about Christie is she offers almost unlimited material.

A: And her good stuff is really pretty good. As is, as generations have discovered, Sherlock Holmes. A lot of the older writers read very well because their books were written for voice. Dickens, for instance, is very much for the ear. And, of course, the only way to understand Finnegan’s Wake, if it’s to be understood at all, is to read it out loud.

Q: There’s something peculiarly apt for audio about The Handmaid’s Tale, no?

A: Is there not indeed? Her story was found on audiotapes from a time when writing was verboten. And it ends with a university talk, with laughter and applause put in.

Q: You added some things to the audio version, questions for the professor organizing the conference on Offred. Is changing an audiobook psychologically easier for an author than changing words on a page? Does an e-book feel like it’s a printed text, something set in stone, while audio feels more fluid?

A: I don’t know about that. There’s a book called The Written World about to come out which explores what happened when writing arrived, how it altered things. It was another of those transformational moments—like what happened when television came in, when the Internet arrived—that alter people’s relationship to what they think they know. Oral means you’ve got many different versions; text differs too, but not as much. When I was writing The Penelopiad, I found that the stories about Penelope are many, but only one version got into the Odyssey. The version in which she slept with all 100 of her suitors did not.

The relationship of the storyteller, say the Homeric bard performing at court, to the audience, is very different than that of writer and readers. With writing you are never in the same time and the same place as the person who is reading, whereas with a performance you are. That changes things. But a recorded performance is different still.