Canada's most famous novelist in conversation 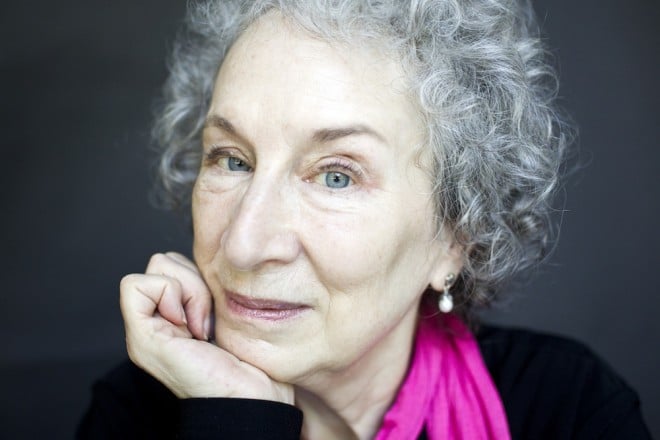 After 10 years, Canada’s most famous novelist has completed her post-apocalyptic trilogy with the Aug. 27 release of MaddAddam. In the first volume, Oryx and Crake (2003), Margaret Atwood explored the male-dominated, technological elite’s perspective. Her second, The Year of the Flood (2009), followed a more female-centred parallel track, focusing on characters in the hardscrabble world outside the guarded compounds. Now, in the wake of the plague—deliberately engineered and released by Crake—that has devastated humanity, Atwood weaves the two narrative strands together.

Q: Tales grow in the telling, as Tolkien remarked. Is the story complete, or could there be a quartet on the horizon?

A: It’s complete. As far as we know now.

Q: No quartet on the horizon?

Q: Before I spend any more time pondering the pallindromic nature of MaddAddam or the fact he has your initials, should I?

A: My initials? No. And the spelling has more to do with the problem of finding an Internet name that hasn’t already been taken.

Q: There are surprises, some of them from how funny the end of days can be, like the Feast of St. Maude Barlow of Fresh Water.

A: No spoilers now.

Q: And far more optimism than a reader of Oryx and Crake might have expected.

A: There are always surprises in writing. As for the optimism, you can call it that or you can call it a necessity of the novel form. In order for there to be a story at all, there have to be people or people-like creatures, as in Watership Down, who can communicate and whose point of view you can explore.

Q: You’ve been more than a decade at this, and your timing has been exquisite. When you began, Toronto was SARS central, while this week comes news that U.S. scientists want to increase the lethality of bird flu so they’ll know how to deal with it if it does so on its own.

A: They’ve made a superflu, yeah, exactly. They’re not the only ones. I think they’ve done a superflu in China, too. And you think, “Okay, that’s great, guys, but don’t let it out of the box.” Wait ’til they start on the airborne Ebola or Marburg; then you’re really going to have fun.

Q: Plague hangs over the trilogy.

A: Plague has hung over human history. The biggest human extinction was after 1492 in North and South America when the mortality rate was 95 per cent, which is enormous. But again, I’m actually giving you grounds for optimism: There were enough to continue. The five per cent who made it through are what you need to survive a bottleneck, which we have been through before. I was an early reader of Rats, Lice and History, back in the ’50s. Remember it? Its grandchild was Guns, Germs and Steel. We don’t actually know how many people survived Crake’s epidemic, but—even a thing like that—it’s always more than you figure.

Q: More than I figured in MaddAddam, and communication is an issue there, too.

A: More survivors than you think, but they can’t talk to one another once the lines of communication go down, so they don’t know, and that is what would happen in the real world. I was slated to go Los Angeles at the moment when that Santa Monica earthquake happened, and Los Angeles was cut off. You couldn’t phone anybody there, so there were a couple of days when nobody knew whether your friend—or agent, in my case—had survived it. You didn’t know. In the First World War, people would be receiving letters from loved ones who had been dead for weeks, and they would not know until that black-bordered telegram arrived. I remember, of course, when it was letters only, or the telephone, and you did not make expensive long-distance calls unless it was, “Come home to the funeral,” or the like.

Q: Do you think that the plague is the crucial but random factor in our own future?

A: The epidemiologists think so, which is why they’re on red alert most of the time. We think we know how to deal with what’s there now. We almost know. Somebody lets smallpox out—and don’t think they didn’t keep stores of it—a lot of people are going to be in trouble, because they stopped vaccinating people for smallpox some time ago. Some of the old diseases that we think are gone—case in point, measles—are back, now that somebody has spread around, in a very wicked way, the idea that these inoculations were making children autistic. Now we’re getting outbreaks that are killing children. The end result is, if you create a population that lacks immunity, and diseases are still there, you’re going to get outbreaks and you’re going to get death. In my generation, diphtheria and polio were still big killers. You heard awful stories about polio, and several of my cousins died of diphtheria. Disease has always been a much bigger killer of human beings than wars.

Q: Ten years ago, you told me you thought modern civilization had about 30 years before collapse. Are we down to 20 now, or have there been reasons to change your mind?

A: The jury is out. Keep an eye on the weather, which is changing faster than predicted, and on the new diseases escaping or being made, even as we speak. It’s a race between new tech and biosphere bankruptcy, I’d say.

Q: At the end of MaddAddam, you write what you wrote in Oryx and Crake: There’s nothing in here that hasn’t been done, isn’t about to be done, or isn’t theoretically possible already. Does that really work when it comes to making alliances with neurally enhanced pigs?

A: Read the papers.

Q: People are talking to pigs?

A: Not quite, but they’ve just melded human and pig DNA in the egg, and those have had progeny. Okay, so they haven’t done the human cortex tissue yet—they’re nervous about that—but somebody’s going to do it! And the results of this will be much more human than predicted. It was just in the paper a couple days ago, a human-pig DNA meld.

Q: It’s important for you to point that out. You want people to know that this is all doable?

A: My brother the biologist disputed the purring in the Crakers [the new humanoid species Crake created before he tried to kill everyone else]. I hold to it: a change in the vocal cords. Nobody quite knows the truth about cats purring, but it does seem to be also a self-healing thing for them, which is why, when you take your cat to the vet and it’s frightened, it will purr.

Q: Do you go to and fro in your opinion of human nature? Crake, who does not think well of us, is very persuasive and I think he must persuade you sometimes. Yet you have altruistic characters.

A: Everybody writing about human beings in any serious way will say the same thing. When we’re good, we’re very, very good, and when we’re bad, we’re horrid. This is not news, because we’re so much more inventive and we have two hands, the left and the right. That is how we think. It’s all over our literature, and it’s all over the way we arrange archetypes, the good version, the bad version, the god, the devil, the Abel, the Cain, you name it. We arrange things in pairs like that because we know about ourselves. It’s also true that there is a rescue thing in people, and not just rescuing the family, which is kind of obvious from a biological point of view. But why is it that some people will jump into a freezing river and swim out to a downed plane for total strangers? What is that about? And it seems to be that it’s part of your concept of who you are. That’s why some people run into the burning buildings, because if they don’t, their concept of who they are will be violated. They wouldn’t be who they thought they were.

Q: I’ve heard you quoting Kafka, “There’s lots of hope, but not for us.” I don’t know what he meant by that, so I thought I would ask you.

A: He was making a joke. A lot of the stuff Kafka said he thought was hilariously funny.

Q: You were just kidding, too?

A: As Freud said, “Jokes are always serious.”

Q: You haven’t written a realistic novel since The Blind Assassin. Recently, you’ve been less rooted in Canadian history and more universal. Have your interests as a writer changed?

Q: How do you see yourself in the national imagination? You seem at times a literal icon, good or bad. That’s why you get, as you put it yourself, the odd brick through your window, aimed at you personally.

A: It has been this way since 1967. I think it’s something to do with a) my hair, which used to get reviewed regularly when I had more of it, or b) my horoscope. But in the Chinese system, I’m a rabbit. Peaceful, burrow-loving, fuzzy?.?.?.?go figure.

Q: You’ll be 74 this year. Now that retirement’s an option for both popes and writers like Philip Roth, do you ever contemplate it?

Q: So you’re not planning to run for mayor of Toronto?

A: That would be a vision of hell for me.