Book review: How to Ruin a Queen: Marie Antoinette and the Diamond Necklace Affair 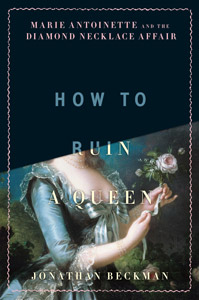 HOW TO RUIN A QUEEN: MARIE ANTOINETTE AND THE DIAMOND NECKLACE AFFAIR

Three years before revolutionaries toppled Louis XVI and his Austrian-born wife, Marie Antoinette, France was mesmerized with a different tumult. Cardinal Louis de Rohan, scion of one of the nation’s grandest families, was in court, accused of stealing a famously expensive necklace from jewellers who’d created it . He claimed he’d acted at the behest of the queen, who then reneged on paying for the gaudy 2,800-carat piece. The resultant scandal solidiﬁed Marie Antoinette’s reputation for unbounded extravagance.

Yet, as Jonathan Beckman, explains in a masterful new account of the diamond necklace affair, nothing is as it appeared. There are fake royals, forged letters and disappearing gems as well as kidnappings, trysts and even a duel involving poisoned pigs. If the tale was fictional, it would be dismissed as an overwrought fantasy, yet in Beckman’s hands, its machinations unfold as an audacious caper that will enthrall readers much as the original events captivated Europe.

At the book’s heart are two misfits. Jeanne de Saint-Rémy is a dirt-poor descendant of a Valois king. Lineage, however royal, can’t be eaten. She starts climbing the ancient regime’s rigid class hierarchy early. At six, she’s begging on a country road when her antics grab the attention of a passing marquis and his wife. Soon she’s ensconced in their family chateau. By 1782, after using and discarding a series of patrons, she lands at the royal court of Versailles.

Jeanne’s life at the heart of French power amounts to little until she latches onto Louis de Rohan. Regarded as an intelligent dilettante, the gullible aristocrat earns himself Marie Antoinette’s enmity by ridiculing her mother, Empress Maria Theresa of Austria. Desperate for royal favour, he falls for Jeanne and her scheme—he’ll covertly buy the expensive necklace that he believes the queen secretly covets, then hand it to Jeanne, who he has been led to believe is Marie Antoinette’s confidante. Jeanne gets the necklace but can’t sustain the elaborate scam. The resultant scandal ruins the lives of all involved. While Jeanne de Saint-Rémy escapes to London where she writes a self-serving account of her life, her most famous victim is trapped in Paris. In 1793, Marie Antoinette is marched to the guillotine.