Book review: Marissa Mayer and the fight to save Yahoo! 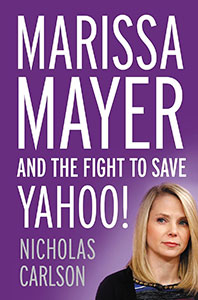 MARISSA MAYER AND THE FIGHT TO SAVE YAHOO!

Yahoo! CEO Marissa Mayer’s 2013 Christmas bash featured a flannel-pyjama theme, snow on the front lawn (trucked to Mayer’s home in Palo Alto, Calif.) and a backyard skating rink. At one point, a PJ-clad Mayer ran out of the house and hopped on a miniature Zamboni. Other corporate bigwigs might have been eager to show off their “fun sides” by hamming it up in front of the guests. Not Mayer. She stared, unblinking, at the ice in front of her, trying to make it as smooth as possible.

The anecdote, one of several in Carlson’s lively and meticulously researched book, offers a glimpse of Mayer’s intense personality and offers clues as to why she’s been unable to turn around Yahoo!, one of Silicon Valley’s biggest and most troubled Internet companies. Formerly in charge of the look and feel of Google’s all-important search engine, Mayer was initially heralded as a saviour when she arrived at a directionless Yahoo! back in 2012. Observers gushed about her Steve Jobs-like focus on details and grinding work ethic, as evidenced by her mere two-week-long maternity leave after giving birth to her first son. And yet, Yahoo!’s slide into irrelevance continued.

One reason, argues Carlson, Business Insider’s chief correspondent, is that Mayer is far less adept at running a 12,000-person company than she is at building elegant user interfaces. (Some of Yahoo!’s recent mobile apps have won design awards.) She’s late for meetings, lacks critical interpersonal skills and may have completely misread Yahoo!’s middle-America audience with her focus on high-end brands. Of course, perhaps Mayer was simply given an impossible job. Founded in the mid-1990s by Jerry Yang and David Filo, Yahoo! was conceived as a directory that helped users navigate the Internet’s early chaos. These days, there are far better ways to find relevant online content, including Google, Facebook and Twitter. In fact, some argue Yahoo!’s current $46-billion valuation is mostly due to its hefty stake in Chinese e-commerce phenomenon Alibaba, meaning Yahoo!’s core business may not actually be worth anything at all. “[Yahoo!] solved a global problem that lasted only for a moment,” Carlson writes. If that’s the case, Mayer may wind up being both the best and the most ineffective CEO the company’s ever had—polishing Yahoo!’s ice to a mirror finish, only to look up and realize there are no partygoers left to skate on it.