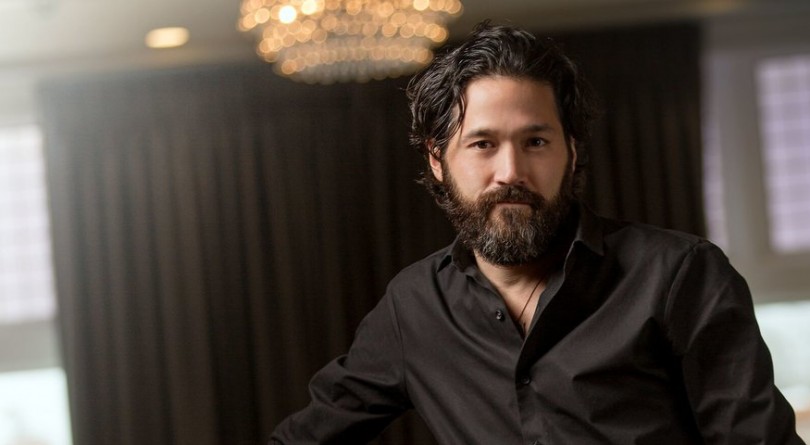 Mark Sakamoto, author of “Forgiveness: A Gift from My Grandparents.” (Photo by Jeff Noon)

Late last month, Mark Sakamoto’s Forgiveness: A Gift from My Grandparents, passionately defended by fashion journalist Jeanne Beker, won the CBC’s annual Canada Reads competition. Sakamoto’s moving 2014 family memoir focuses on two of his grandparents—Mitsue Sakamoto, his father’s mother, and Ralph MacLean, his mother’s father—who suffered terribly during the Second World War. Their response to their personal tragedies helped the grandson cope with his own: a childhood traumatized by an alcoholic mother. It is a book both intensely personal and highly resonant in the wider world, perhaps more now than when it was first published.

The Canada Reads’ victory has naturally sparked renewed interest in your book, but do you think there’s more to Forgiveness’s resurgence today?

It’s been really interesting. I started writing in 2011-ish. Both grandparents, Ralph and Mitsue, were alive. Ralph is still, but my grandma is not any longer, but I remember talking to her like it was yesterday. Like many Japanese-Canadians, she didn’t talk very much about her experiences during those injurious years. When I was interviewing her, I asked her why. Why am I learning much of this for the first time? And she looked up at me in her calm and graceful way, and said, because “Hate can come back.” She didn’t want to give voice to that hate and pass it on or trigger it. And you know, I laughed at the time, 2012, not at my grandmother but at the notion that kind of ugly nationalism, of state-sponsored racist policies, could find a renewal in my lifetime. Yet here we are in 2018 and you can’t pick up a Maclean’s magazine or turn on the CBC or CNN or whatever and not see exactly the themes I explored in Forgiveness. In many ways I think my book is more relevant today in 2018 than it was then.

That’s what I was thinking about it. Forgiveness rings a different bell now, more sombre. It’s not the past only anymore.

No! It’s an alarm bell now. The book is not just a retrospective. I think that was part of what went into winning Canada Reads, because you know the event is designed to find a book to open your eyes any given year. We do have to look at our times with our eyes wide open and with a view to the past, because the past can provide a road map. There are always forks in the road, and we decide which fork we take.

MORE: Raymond Moriyama: ‘We were immediately cast as enemy aliens’

What you quoted of your grandmother’s words—“Hate can come back”—paused me for a moment, as I wondered whether she was speaking about herself, that she didn’t want to poison herself, to feel the hate again.

Oh, I see, but, no, like my grandpa Ralph, she had cleansed her heart.

Like him, starved and beaten in a POW camp, she did have a lot to hate.

She did. She had reasons for anger and resentment. She lost her entire life, everything around her, everything that she knew. She went from a culturally rich and prosperous life to living in a chicken coop in southern Alberta where she baked in the summer and froze in the winter, and drank water from a dugout. It was as bad as you can get—and her only crime was her ethnicity. She was a Canadian citizen, and her own government in the name of national security did this to her. As it always does, hate came wrapped in the flag, the oldest trick in the book. But that wasn’t what she was talking about. She had used forgiveness personally to really cleanse her heart and move away from those years to a more positive and hopeful future. I’m glad she did because I was a part of that future.

How is your grandfather now?

He’s 94, living in Calgary at the Chartwell Colonel Belcher home for veterans, one of only 12 Hong Kong vets still alive, and sharp as a tack. Now that he’s in the news again, he’s receiving phone calls from cousins in the Îles de la Madeleine, where he’s from, and calls and letters from old army buddies. It’s just shockingly beautiful.

Mitsue and Ralph were at the same time polar opposites and very alike, in their inner selves and in what happened to them: two Canadian citizens, both POWs, one a prisoner of Japan, the other a prisoner of Canada.

After my parents started to get serious, dating romantically, the Sakamotos invited the MacLeans to drive down from Calgary to Medicine Hat to break bread with them. It was the most important dinner of my life, I think, even though I wasn’t born for another decade. Like she always did, but never more than with this meal, my grandmother really fretted about what to serve. Obviously Ralph as a POW could eat with chopsticks—but would he want to? Would he want to eat rice, the white rice that was a sort of mushy gruel when he was eating it in Hong Kong and Japan? Would the food bring back bad memories? It’s true, they were exact opposites in every way: white/Japanese, male/female, tiny/big, East Coast/West Coast—every single way. And it could not have been easy for them to bridge that. First time opening his door and seeing my father, a 20-year-old Japanese man—a soldier-aged guy—calling on his daughter, there’s no way Ralph could not have seen glimpses of his past torturers. Likewise, when my grandma first opened the door to Ralph for that dinner, there’s this big, tall, white man with a brush cut—he must have looked like the RCMP officer who shut down her wedding at 7 o’clock on the dot because there was a curfew on Japanese-Canadians.

FROM THE ARCHIVES: Canada’s “Legacy of shame,” regarding Japanese-Canadians

You’re saying the dinner could have been a disaster?

Yes, but almost immediately they saw themselves in each other. They saw they were both survivors who were able to move beyond pain, both determined they weren’t going to bequeath those awful years to their children.

Ralph and Mitsue were, as you say, the north stars of your book, but they weren’t the genesis of it. Forgiveness is rooted in a sense of generational continuity. When your older daughter was born in 2009, it made you think of your mother and her tragedy, and that brought you to really consider your grandparents.

That’s the rub of it, man. My mom was such a wonderful human. She had a light to her, not a soft maternal light but the light you get from a match—heat, too. She was just the best mom. And then she got sick and she died of alcoholism, a disease with no mercy. You have a thousand small goodbyes before the final goodbye. And all that just struck me when I was holding my daughter. It’s your finest moment in life and yet the grief comes back and hits you and you find yourself angry and sad at a defining moment because your mom’s not there. I recognized then that my heart was this little human’s emotional home for the next while, and I clearly had some rooms that needed cleaning up. So, I started to think, how did my grandparents do this, how did they get through their apocalypse? While I’m not drawing any similarities between my personal story and theirs in terms of trauma, it was they who gave me a way forward.

And the book is meant to connect them to your daughters.

I told the girls I wrote this so you know what you’re made of. These people’s blood is in your veins. Life, whether it’s geopolitical events or your own personal traumas, is going to throw you down. There’s nothing special in that—all of us are going to fall down. It’s the getting back up and living your life with hope that matters. I wanted my grandparents’ lives chronicled for my daughters, so that when life brought them down they had a path forward, a lighthouse to get them through choppy waters.