The first and only biography of Amis

Spoiler alert: It's not great, but it will have to do — for now 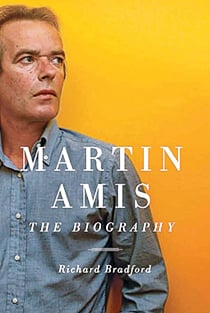 Despite having mused on the banality of an English writer’s existence (“When success happens . . . he acquires a new typewriter”), Martin Amis makes an ideal subject for a biography. His life, just like his prose, resists cliché.

He grew up in father Kingsley Amis’s often scandalously bohemian household. He spent most of the ’70s with a high-powered cultural coterie including Christopher Hitchens and Julian Barnes, and a string of well-connected (and, Bradford is keen to stress, attractive) girlfriends. By the ’80s, he was somehow both a literary eminence and an enfant terrible. Since then, everything about him—literary advances, domestic situation, views on religion and politics, dental work, and his move to the U.S.—has provoked fierce debate.

Although Amis published his own memoir, Experience, in 2000, this is surprisingly the first biography. Bradford, an English professor, is perceptive about Amis’s academic work, and he mines nuggets of gold from interviews with the writer and his friends, notably Hitchens—who details romps with the aristocracy and excursions into the demimonde. But in describing the man he has hailed as “the finest prose stylist of his generation,” Bradford falters. His writing is syntactically challenged, repetitive and often maddeningly self-contradictory; what’s more, his book must have gone to press when the copy editor was on vacation. Bradford wearyingly insists on equating Amis’s characters with real-life acquaintances, and his literary judgment is suspect—although not so much as in the previously published English edition, which claims Amis’s 1984 novel Money “is as important a literary landmark as Ulysses.”

That edition, apparently vetted by Amis, was fawning and flawed. But instead of rewriting, Bradford has now simply hedged his bets. He asks, “Can I claim knowledge of what he’s ‘really like’? I doubt it.” And later: “Is he a great writer? . . . We will see.” Is this a great book? No. Alas, until The Biography loses its definite article, it’ll have to do.