War through the eyes of Borden and Mackenzie King

Maclean’s presents part three in a series with the five Charles Taylor Prize nominees. The prize for literary non-fiction, which recognizes excellence in Canadian non-fiction writing, will award $25,000 to the winning author on March 4.

Heading off to Trent University two decades ago, Tim Cook didn’t think there was anything inevitable about him becoming a Canadian historian—let alone acquiring one of the profession’s coolest job titles, Great War historian at the Canadian War Museum in Ottawa—even if he was the son of parents who each had a Ph.D. in the field. “Anything but,” was his guiding principle, says Cook. But then there was that absorbing Second World War course, and the memory of the trip to Vimy Ridge his parents brought him on when he was 17. “It all turned me on to history, especially military history,” he says. And with a vengeance. Cook, 41, has been crafting muscular, critically acclaimed and bestselling volumes about the First World War—including Shock Troops, which won the 2009 Charles Taylor prize—at a pace that will soon write him out of his job description. (“Yes, my next book,” he laughs, “will be on the Second World War.)

Cook’s latest work, Warlords, nominated for this year’s Charles Taylor, straddles the two global conflicts. In it, the historian compares the records of the two prime ministers who steered Canada through them, Sir Robert Borden between 1914 and 1918, and William Lyon Mackenzie King from 1939 to 1945. “I was trying to show similarities and differences,” says Cook, who points out the biggest difference was the staggering “newness of everything” for Borden: especially “the massive civilian armies—600,000 men from a population of eight million, the equivalent of 2.5 million men now—how do you accomplish this, how do you pay for it?”

King, on the contrary, had experience—Borden’s and the country’s—as a guide, particularly the events of the darkest of war years, 1917. With 30,000 Canadians already dead, and the army facing manpower shortages, Borden called for conscription during that year’s federal vote, the most viciously fought and unity-threatening election in our history. King recalled himself going down to defeat, his hero Wilfrid Laurier destroyed, the country nearly torn apart and his mother dying soon after: “all conflated in his memory,” says Cook. While Borden was always willing to charge ahead toward victory and “prepared to sacrifice political unity for the sake of the soldiers overseas,” concludes the historian, King was “always trying to put on the brakes,” and not willing to make that sacrifice.

And there was another key difference too. King was not a military-minded man, but he was a ruthless political killer. When his vacillating about conscription and his crippling caution (so wonderfully caught in poet F.R. Scott’s description of the prime minister as “doing nothing by halves that he could do by quarters”), brought his government to crisis in 1944, King knew how to deflect blame from himself and keep his cabinet, and country, intact. If the chief duty of a Canadian prime minister at war lies not in winning the conflict but in preserving the nation during it, King was a great warlord. 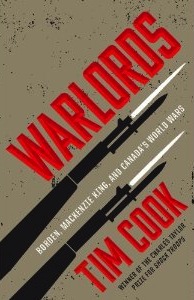 In 1944, King was convinced that [defence minister James] Ralston was to blame for the reinforcement crisis because he let his generals run him. King reminded the cabinet that it had been Ralston who had split the army, sending half of it to Italy, where it was engaged in fierce battles that ran up casualties. General A.G.L. McNaughton had warned against fighting in two theatres and had been overruled and sent home. Perhaps the general had more political sense than his minister? The prime minister continued to think highly of McNaughton and had been considering him as a candidate to be the first Canadian-born governor general. King was motivated in this action by his desire to defang him politically, because Liberal sources had told him the Tories were wooing McNaughton to lead a coalition government. Now King wondered if the popular general might replace Ralston as minister of national defence.

After a week of high stress, [RCAF minister] Chubby Power remarked that King at times was exhausted and “not reasoning very well.” The ministers who opposed him on conscription—Ralston, [Angus] Macdonald, [J.L.] Ilsley, [T.A.] Crerar and [C.D.] Howe—were also the ministers who had never embraced King’s social legislation. In the heat of the sustained battle, King now drew a connection between the issues, reinforcing in his mind the idea that they were plotting against him. The Great War again offered warnings, and King harkened back to his hero Laurier in his time of crisis, when “his supposedly strongest colleagues left him, one by one, and joined their political enemies and became a party of conscription.” Even as he talked half-heartedly of resigning, King was determined to stand his ground against the “conscriptionists,” which is how he now described them, in order to “fight for the peoples’ rights in this country.” King could never acknowledge, even to himself, the legitimacy of the opposing view, that the conscriptionists were fighting for the soldiers’ rights—and lives—overseas.

On Oct. 31, King met with McNaughton. The general was anxious to serve. He continued to carry a grudge against Ralston and [chief of staff Kenneth] Stuart for his professional demise as army commander and he was now pleased to repay the favour. Although he was not privy to relevant reports or recent intelligence, the general assured King that if he was minister he would find a way to convince [the men conscripted for home defence to enlist for overseas service.] Almost incomprehensibly, he also blamed the high Canadian casualties on a shortage of guns and shells, making it appear to the unmilitary King that it had again been incompetence that put him, as war leader, in this precarious situation.

The appalling situation came to a head on Nov. 1. King informed the governor general and his key confidant [Louis] St. Laurent that he would have to remove Ralston, whom he had described a few days earlier as “inhumanly determined to get his own way.” The prime minister then lined up his supporters in cabinet, calling them on the phone and asking them to follow his lead in the meeting later in the day. At the cabinet meeting, a tired Ralston reiterated the issues, but his voice quivered and he seemed beaten. King raised all the same objections. He was hoping that Ralston would offer his resignation, as he had in the past, which King would then accept. Ralston did not; indeed, he was more conciliatory and open to solutions than he had seemed to be before. King sweated and looked for an opening as the meeting dragged on for hours. No such opportune moment occurred, but he struck anyway, telling the cabinet the issue had to come to a conclusion that night. With tension rising, King told the now silent ministers that Ralston had told them repeatedly that [more] men would not enlist without conscription, but King believed McNaughton could rally them to volunteer. A white-knuckled King referred back to Ralston’s 1942 resignation letter, which he had kept, and said that the deed was done. He would now accept Ralston’s letter. “A chill of frozen silence” filled the room, wrote one observer. With great dignity, Ralston rose, shook hands with several friends, and then with King, and left the cabinet forever.

After throwing Ralston on his sword, King pleaded with the other ministers—especially Macdonald, Ilsley, and Howe—to stand by the government. Macdonald wavered but did not go. He remarked later that as he watched King politically execute his friend he had felt like punching the prime minister in the face, but he believed that McNaughton ought to have a chance. At the same time, King had seized the initiative, moving so rapidly that these powerful and angry men had been stopped in their tracks. King’s firing of Ralston was one of the most dangerous political gambles of his long career, but, as always, he had prepared the path, sized up his opponents and acted boldly. “It was a scene I shall never forget, nor will those who were present,” wrote King to his diary. That was a classic King understatement. One of the shocked ministers sitting at the table later described King’s expulsion of Ralston as “the most cold-blooded thing I have ever seen.”

Excerpted from Warlords by Tim Cook. Copyright © 2012 Tim Cook. Published by Allen Lane, an imprint of Penguin Canada. Reproduced by arrangement with the publisher. All rights reserved.