Book review: Math on Trial: How Numbers Get Used and Abused in the Courtroom

By Leila Schneps and Coralie Colmez 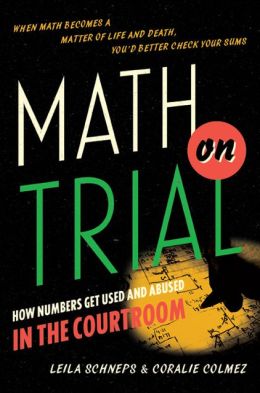 Was it a successful purse-snatching or an abomination of math? In 1964 Los Angeles, an elderly lady had her handbag grabbed by a young, blond woman who then ran down an alley and got into a yellow car driven by a black man. No one saw the thief’s face, or got a clear look at her driver.

Diligent police work soon identified a likely couple: young, blond Janet Collins and her husband, Malcolm, who was black and owned a yellow Lincoln. Lacking any physical evidence to tie the pair to the robbery, however, the prosecution was initially stymied.

In a now-infamous stroke of inspiration, prosecutor Ray Sinetar decided to enlist math as his crime-fighting partner. He assigned probabilities to each identifying characteristic. Yellow car: one in 10, white woman with blond hair: one in three, black man with a beard: one in 10, interracial couple: one in 1,000, etc. By the time he was done, Sinetar claimed he had proven there was a mere one-in-12-million chance Janet and Malcolm were not the perps. The jury was impressed enough with this computational approach to law that they found the pair guilty of second-degree robbery.

Yet Sinetar’s confidence in his math skills was soon proven misplaced. He’d violated probability theory in several significant ways, and Janet and Malcolm were eventually freed. As Schneps and Colmez detail, the case is one of many that reveal how lawyers and juries can often be led astray by numbers big and small.

The authors take a close look at 10 egregious courtroom math mistakes from the 1800s to present day, and the damage they have done. Netherlands nurse Lucia de Berk was unlucky enough to be on duty for an unusual number of baby deaths. At her trial, an expert testified there was a mere one-in-342 million chance she was not a murderer. He was wrong. She was innocent. But it took four years, and better math, to finally clear her name. Justice may be blind, but it can also be innumerate.