The author of 'Inside' on what she's reading now, plus an excerpt from her novel

Brian Bethune sat down with all five authors shortlisted for the Rogers’ Writers’ Trust Fiction Prize, which will be announced on Nov. 7. Here’s the fourth in the series, with author Alix Ohlin, where we find out what the effect of literary festivals and literary prizes has on their writing life; what of themselves–beside talent and imagination–went into their nominated books; and what they are reading now, followed by an excerpt from their novel. 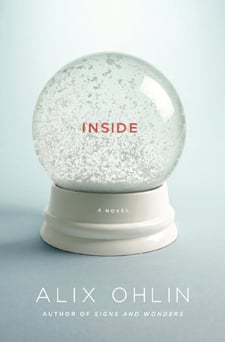 ** EXCERPT**  Most of the day’s appointments were routine, until it came to Annie Hardwick. During an earlier visit, Grace had seen the shiny pink scars that inched up the girl’s pale stomach to her rib cage; she had lifted her shirt with a feigned reluctance that failed to conceal her pride in the harm she’d done herself. As common as cutting was, Grace still winced to see the evidence of it on Annie’s skin. The girl wasn’t beautiful yet, but she was going to be. She hadn’t grown into herself or into her body. Her features loomed too large on her face, and blue veins showed through her translucent skin at her temples and chin. Her dirty-blond hair hung thinand lank to her shoulders, and her forehead was covered with small red pimples. In a few years, Grace could imagine, when Annie was taller and learned to sit up straight, when her body grew curves to match her face, she would look like the movie star she so desperately wanted to be.

But Annie didn’t know this. All she saw was the infinite distance between herself as she was and the perfection to which she aspired. Her father was an orthodontist and her mother a lawyer, and they had raised her to hold herself to a high standard. She got good grades, participated in extracurricular activities, had friends and family who cared for her. All this was invisible to her, or at least immaterial. Her lack of perspective was gigantic. When she looked at herself she saw an ugly, mean, ungainly girl, constantly failing, deservedly ignored. She believed wholeheartedly in her own shortcomings, and nothing Grace had told her had unsettled this conviction.

One day her mother had found her asleep on the couch. A button on her shirt gaped open, exposing her midriff, and her mother thought she saw a rash there. Bending closer to inspect it, she saw that it was an intricate maze of cuts, each line crossing the next, forming a mass that looked like a star. Hence, therapy.

Copyright © 2012 by Alix Ohlin. Reprinted with permission of House of Anansi Press.