Brian Bethune sat down with all five authors shortlisted for the Rogers’ Writers’ Trust Fiction Prize, which will be announced on Nov. 7. Here’s the first in the series, with author Tim Bowling, where we find out what the effect of literary festivals and literary prizes has on their writing life; what of themselves–beside talent and imagination–went into their nominated books; and what they are reading now, followed by an excerpt from their novel. 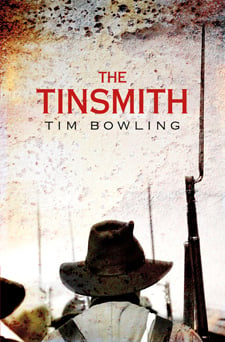 **EXCERPT** The morning of the 19th proved very fine, clear and warm. Most of the able-bodied troops had assembled in readiness for an advance or attack, but that still left a small army of wounded in the tents and farm buildings and on the ground near the operating tables. Along with everyone else, Anson learned of the enemy’s departure from the field. The marching and wheel-grinding audible through the night and past daybreak were exactly what they sounded like—a retreat. But Anson did not know whether that meant victory for the Union—he could hardly think so, given the carnage. Nonetheless, the retreat encouraged him. The last thing he needed was a fresh supply of wounded.

A pungent, putrid smell of rot consumed the day. The thousands of dead soldiers still lying in the field bloated and turned black. Their bowels emptied. And since most of the men also suffered with Anson’s malady, the air became diarrheic, thick and foul enough to seem almost solid. The civilian onlookers soon retreated—at least most of the fine ladies and gentlemen picnickers did—those who had crowded the hillsides to watch the battle two days before.

But when Anson, unable to sleep and unable to remain amid the suffering, again headed for the large tree on the horizon, he noticed that other civilians had embarked on work of their own. He stopped a short man in a bowler hat rifling the pockets of a dead Union soldier.

“You! What are you doing there?”

The man straightened up, his white-gloved hands empty. He grinned wolfishly, then dabbed a lace handkerchief to his nose.

Anson looked at the dead soldier. His young face was almost coal-black. A mass of flies crawled over his smashed torso. The boots had been removed from his feet.

“What were you doing to this man?” Anson tried to put anger into his voice, but the effort left him spent. He barely maintained his balance.

“Oh, I was touching him only in his service, I assure you. He might be one of the sensible ones with a coupon, you see.”

The man lightly brushed a fly away from his pink mouth and pointed to an ordinary-looking wagon a short distance behind him. His reedy voice carried an odd mixture of enthusiasm and pride. “For the embalming. If he had possessed the foresight, for the sake of his loved ones back home, to have purchased one of Mr. Greaver’s coupons, then his corpse would have been preserved and shipped home in a lovely zinc-lined coffin.” He kicked at the body, raising a handful of flies. “But alas, he did not avail himself of the opportunity when it was presented to him. Others, no doubt, were wiser, more considerate of their families.”

Anson followed the man’s gaze over the rolling, ravaged fields. Clusters of negro contrabands were busily recovering corpses for burial. A few dozen feet away, a long line of dead Union soldiers appeared like a festering snake on the torn ground. Two civilians stood over them. Some kind of black apparatus—like a survey tripod, only bulkier at the top—was set up nearby, a few feet from a delivery wagon draped in a tarp. Anson recognized the burly, bearded Scotsman from earlier. What had he said he was? A photographer?

Remembering daybreak’s runaway horse, Anson turned and walked back in the direction of the barnyard. It took him several minutes to find the spot. When he did, he discovered that the mutilated corpse was gone, though the charger remained in its gentle kneeling posture, its flanks and head swarming with flies, their buzzing as loud as bee-hum. Anson wondered if the Scotsman had taken the study he’d wanted. Sadly, he knelt and stared into the horse’s face. Somehow its closed eyes seemed dimly alive with terror still. No doubt some investigation of the murder would follow, now that the Rebels had retreated. Anson breathed deeply and the effort set off another violent bout of coughing. He raised his hands to his mouth. His own blood mixed again with the dried blood and pus of the hundreds of wounded he’d tended over the past two days.