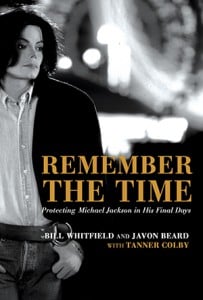 REMEMBER THE TIME: PROTECTING MICHAEL JACKSON IN HIS FINAL DAYS

By Bill Whitfield and Javon Beard with Tanner Colby

“We both carried semiautomatic Glock pistols with extended magazines. We had Tasers. Each of them delivered a charge of 1.2 million volts, powerful enough to take down a 300-lb. man. We had a cache of backup weapons: MP5 fully automatic submachine guns, military-style AR-15s, 12-gauge automatic shotguns, and concealable MAC-10s.” Such, says Javon Beard, was the arsenal required to protect Michael Jackson. Apparently it took enough weaponry to flatten a village to safeguard a fawn of a man who espoused kindness and goodwill but, according to Beard’s co-sentry, Bill Whitfield, “trusted no one.”

In December 2006, Beard and Whitfield were hired to transport Jackson from McCarran Airport to his rented Las Vegas mansion. That one-night assignment became a full-time gig, continuing uninterrupted until the superstar’s death 2½ years later. Apart from Jackson’s three children, no one maintained closer access during his final years.

The narrative, shaped by Beard and Whitfield in alternating snippets, is heartfelt: their respect for Jackson as a boss and father, and their affection for his kids, sincere. Indeed, while seemingly everyone in Jackson’s life had their hands deep in his pockets, Beard and Whitfield remained steadfast even after months without a penny in salary. (Jackson’s finances were, they observed, a Gordian knot of loans and counter-loans involving tens of millions of dollars, a flurry of Peter-paying-Paul transactions to keep him a half-step ahead of endless lawsuits and creditors.)

Through most of the bodyguards’ tenure, Jackson remained professionally inactive, rarely leaving whatever house they were guarding. Still, the pair were front-row witnesses to the circus that was his life—estranged family members showing up at all hours, rabid fans parked on the sidewalk, Jackson’s crazy impulses and spending sprees, the tsunamic frenzies whenever he appeared in public. The emerging image is of a sweet and precocious but lonely man-child. Then, as he prepares for his never-realized comeback tour, Beard and Whitfield witness an astonishing transformation, realizing there are two Michael Jacksons: the fragile Peter Pan and the mighty King of Pop—dynamic, authoritative, fearless.

The million-dollar question—what really happened the night Jackson died in L.A.?—remains unanswered. Beard and Whitfield were stuck in Vegas. Yet such an anticlimax in no way diminishes what is a candid, intimate and remarkably sage appreciation of a tortured soul with everything and nothing.