Paul Falkowski's book is a big read about a little thing: the sophisticated, durable bacteria 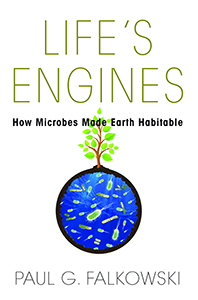 When it comes to life forms, humans tend to confuse big with important, despite clear evidence to the contrary. People have been killed by whales, elephants and, of course, their fellow humans, but even with the latter group counted, the total is dwarfed by the victims of microbes. There are so many of them, for one thing: 40 million individual bacteria in a gram of soil. Their biomass, their collective weight, exceeds that of all the plant and animal life on Earth. They live everywhere, from Antarctica to inside our guts to radioactive waste. And as Falkowski’s loving examination sets out, life on this planet is organized by and for bacteria—the rest of us are just along for the ride.

Falkowski describes a childhood of fascination with what he could see under a microscope and a frustrating education in biology, which began with the earliest multicellular creatures, ridiculously late, in his opinion, in the history of life. Even if we can’t be precise about the date of the singularity—the one-time evolution of oxygen production in the “microbial Bolsheviks,” the cyanobacteria that revolutionized life—we should pay attention to the later Great Oxidation Event 2.4 billion years ago. Animals require oxygen, and the event marked the point when cyanobacteria had finally produced enough. Animals didn’t appear for another two billion years, since the first effect was to create a snowball Earth, the longest (300 million years) and most extensive glaciation in planetary history. Microbes, in short, are the masters.

And that, beyond Falkowski’s admiration for the sophistication and endurance of bacterial life, is the key part of his story. For two centuries we have been decoupling natural systems and acting as though we were outside of them rather than a part. Now, synthetic biologists are looking to tweak microbes to save us from the mess we’ve put ourselves in. Gene and genome sequencing is now so cheap and efficient that tens of millions of microbial genes have been identified. The race is on to create, perhaps, organisms that can degrade plastics, or eat radioactive waste or provide an alternative fuel but, Falkowski writes, “we don’t understand what we are doing.” Science still has limited knowledge of the microbial world and its evolved systems of moving electrons and elements about the planet. We are tinkering with it like a new Bolshevik species, he adds, as fully capable of unintended consequences as the snowball- Earth-creating cyanobacteria.