REVIEW: Midnight in Peking: How the Murder of a Young English Woman Haunted the Last Days of Old China 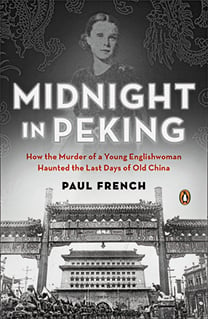 It’s Peking, 1937. China’s former capital, not yet known as Beijing, has fallen on hard times and, menaced by Japanese armies, is soon to experience worse. With the government withdrawn to the supposed safety of Nanking, it’s a backwater. Still home to scholars and former bureaucrats, it’s also crammed with desperate migrants fleeing the Japanese. The foreign population is as combustible, a mix of well-off diplomats and old China hands living in the walled Legation Quarter, and penniless refugees from Stalin and Hitler, mostly clustered in a neighbourhood of opium dens, brothels and cheap rooming houses.

On a frozen January day, in the midst of this tense situation, comes the discovery of the body of Pamela Werner, the 19-year-old daughter of a prominent sinologist, mutilated almost beyond recognition, with many of her internal organs missing. Two detectives, one Chinese and one British, are assigned the case, but everywhere they turn they are stymied by their own scandal-averse governments. It all sounds, right down to the cops’ bicultural partnership, like the kickoff to a promising new mystery series. Except it’s a true story. And, unlike a novel, the police were not able to overcome the barriers put in their way. Werner’s murder was never solved and was quickly forgotten after the Japanese occupied the city in July 1937.

French makes a wonderfully atmospheric tale out of the dying days of a young woman and an ancient city, and manages to craft a very convincing solution to the crime. He was aided immeasurably by a lucky find in Britain’s National Archives, a 150-page report by Werner’s iconoclastic father. Edward Werner was a former diplomat, a scholar who spoke eight Chinese dialects, and a man so stubbornly devoted to China that he stayed in Peking through the Japanese occupation, the Chinese civil war and even two years of Mao Zedong. He wasn’t about to abandon his daughter’s case. What Werner found out, after spending his life savings in Peking’s demimonde, is more shocking than many novelists could imagine.