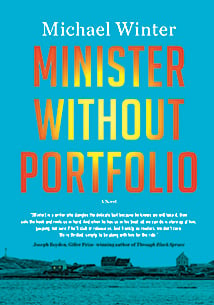 Rare is the writer who can empty the Big Bag of Literary Devices without sounding hackneyed, but Michael Winter pulls off the feat in his new novel, Minister Without Portfolio. The traumatic event, whose aftershocks sets the course of the characters’ lives? Check. The overarching metaphor (in this case, the refit of a house as reconstruction of the soul)? Check. Even the final plot twist is there—though this is no detective yarn.

It starts in St. John’s, where Henry Hayward has worked and drunk his way out of his relationship with the woman he assumed he’d marry. Bereft, he takes a job with a non-military contractor in Afghanistan, where he escapes memory only long enough to witness the death of his chum and fellow Newfoundlander, Tender Morris, in a suicide bombing. On a superficial level, the novel is an odyssey through the emotional aftermath: convinced he’s responsible for Tender’s demise, Henry returns to the landscape his friend used to inhabit, half-consciously slipping into the dead man’s old life, buying the land where Tender planned to settle; rebuilding the decrepit house that sits there. He even finds his way to the arms of Tender’s pregnant girlfriend, Martha.

These sound like the ingredients of woefully worthy Canlit, but in Winter’s deft hands, they are the bones of a powerful read. The pace is staid, yet the mood is taut, with disaster lurking beneath the most banal event. Sly dialogue gives way to cascading detail, à la Cormac McCarthy, and embedded in Minister is an intriguing proposal—that each of us has an orbit of 100 people for whom we are, on some level, responsible. More than witnessing Henry’s disintegration and rebirth, we are left to ponder: who are our 100 people? What are we doing for them?