Book review: Missing Out: In Praise of the Unlived Life 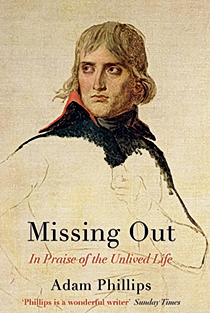 The 17th book by English psychoanalyst and literary professor Adam Phillips asks, “Is the unlived life worth examining?” Known as a pithy writer on subjects such as childhood repression (The Beast in the Nursery) and madness (Going Sane), he has delivered a kind of literary victory lap, passing through them all as they relate to expectation and denial—the ways people want to live their lives but realize they can’t.

In a densely intertwined collection of musings, Phillips expounds on the roots of desire in infancy as understood by Freud (whose Penguin series he edits), indulges in a slyly punning etymological exploration of various related concepts (inclusion, exclusion, frustration and satisfaction, all expressed as variants on the phrase “getting it”), and excavates ideas of deception and knowledge from Shakespearean tragedy.

Where all of these elements cohere, Phillips offers aphoristic insight. Falling in love, he writes, has to do with neediness: “It is as if, oddly, you were waiting for someone but you didn’t know who they were until they arrived.” Rule-breaking is pleasurable in and of itself: “The new morality of getting-away-with-it . . . is a world apparently without guilt; a world in which there are no internalized authorities, no conscience, only external authorities to avoid being punished by.” And there’s nothing ideal about the individual’s relationship with society: “Our need for others is a kind of defeat or capitulation: the submission that turns into our most difficult admission.”

Such pronouncements are provocative, especially in the context of the angst and high-stakes drama he discusses in Othello and childhood trauma. But even as Phillips aims to make his premise universal—“much of our so-called mental life is about the lives we are not living”—he doesn’t examine it in terms of everyday contemporary life. In the distance between the splendour depicted in advertising, the excitement promised by Hollywood, the fulfillment proffered by employers, and the stir-craziness of the 21st-century office drone lies a rich seam of fantasy. What of the strategies we employ to combat malaise and financial woes? Therein is an unwritten book worth reading.