Mobbed by the mom blogosphere

Rebecca Eckler’s book targets the ‘mommy mob,’ but ends up revealing its value 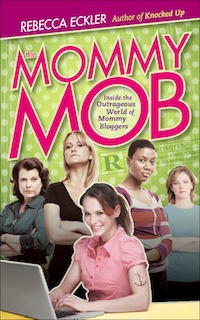 The Mommy Mob is Rebecca Eckler’s ninth book, and currently available on Amazon and in Chapters Indigo and independent bookstores throughout Canada.

When Toronto journalist Rebecca Eckler began writing about her infant daughter nearly a decade ago, “mommy blogging” was in its infancy. New moms, once reliant on word-of-mouth and self-help literature for advice about child-rearing, were just beginning to build an online community that would quickly render those things passé. First-time motherhood, according to a recent U.K. study, is still widely described as an intensely chaotic time in a woman’s life, but the proliferation of parenting blogs and forums from the early 2000s to now (today there are roughly four million mommy bloggers in North America) has no doubt made that experience less isolating.

Every online community, however, has its trolls. Rebecca Eckler has written an entire book about them—in her words, about the “mommy mob” that unleashes its wrath in the mommy blogosphere. Many of these supposed mobsters took umbrage with Eckler’s parenting, and the irreverent tone she employs in her frequent writing for Mommyish.com and elsewhere. “All these lessons we teach our children,” Eckler says, referring to good manners, “these mothers do not follow.”

Eckler’s new self-published book, called The Mommy Mob, reads like a protracted diary entry about every person who has ever besmirched her name over the Internet. But it does tell us something about the toxic echo chamber of parenting in the digital age, where she writes that participants use “often un-moderated anonymous message boards to tear down mothers whose way of parenting they object to.”

Eckler is hardly the first mommy blogger to take criticism from a mass of nameless, faceless online mothers. “Before the Internet,” says Catherine Connors, the blogger behind HerBadMother, “there was no word for ‘the mommy wars.’ Criticisms of other moms took place on back porches and at kitchen tables. Now those judgmental conversations are out there for everyone to see.” Connors is a lapsed philosophy academic and prolific blogger. She was the subject of online controversy in 2006 when she breastfed another woman’s hungry baby at a blogging conference (her own baby wasn’t with her at the time).

Connors argues that mom trolls are more sophisticated than the standard brutish potty mouths of Reddit and YouTube. The difference is critical judgment. “The disputes between helicopter parenting, attachment parenting and the minor controversies about celebrity parenting: None of that would have hit mainstream media 10 years ago. Pick an issue now,” she says, “from breastfeeding to spanking, that’s been worked over in the critically charged mom space and that’s what leads to discussion in the mainstream media.”

Pre-Internet, anti-vaccination activist and celebrity mom Jenny McCarthy would have railed against vaccinations largely unchallenged by ordinary moms. Today, McCarthy’s shoddy science is challenged often, not only by experts or panelists on The View, but by regular people online.

Eckler laments that “that woman vs. woman thing is still going on” in the discourse about motherhood. Yet, for all its self-indulgence, mom blogging allows average moms to shape and define the larger conversation about parenting. Whether it will change anything about the way kids are reared or how they turn out is another story altogether. “Kids are a crapshoot,” says Eckler. “You can be the best parent in the world and your kid might end up in rehab. You do the best you can.”