Monkeys on an Incredible Journey

'After all, I had to have happened' 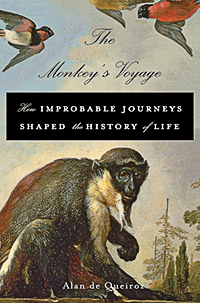 For a century after Charles Darwin’s Origin of Species, biologists seeking a natural—as opposed to divine—explanation for the distribution of life were bedevilled by a problem: How did closely related species end up so far apart? Why are there monkeys in South America as well as Africa? Darwin himself knew it was an issue for his theory of evolution by natural selection, and conducted numerous experiments with seeds immersed in salt water and theorized about snails attached to duck legs, all in the cause of making overseas migration plausible. But with the acceptance of plate tectonics and the concept of continental drift in the 1960s—all of the planet’s dry land was once a supercontinent now known as Pangea—the problem seemed solved. Scientists no longer had to consider wildly improbable notions of animal arks crossing the Atlantic or Pacific: Related species simply ended up on different sides of ocean gaps.

Then along came the molecular evidence. The Atlantic Ocean is more than 100 million years old, but no one looking at molecular and fossil evidence thinks primates of any kind are older than about 50 million years. So forget about notions of a band of proto-simians waving goodbye to soon-to-be-lost cousins across a widening Pangean fissure. As de Queiroz, a biologist at the University of Nevada, points out, it’s Sherlock Holmes time: “Once you eliminate the impossible, whatever remains, no matter how improbable, must be the truth.” Monkeys, who appear out of nowhere in the South American fossil record about 26 million years ago, had to have crossed salt water to get there.

A large part of de Queiroz’s thoroughly engrossing book is a valiant attempt to make this logically necessary but hard-to-accept voyage ever more plausible. He writes of other crossings, remarkable enough on their own: Four species of amphibians on the Atlantic island of Sao Tome must have travelled there on a natural vegetation raft, first down the Congo River and then across 600 km of ocean. Digest that, and maybe a reader can swallow the monkey tale, too.

Postulate the simian Santa Maria—actually a large floating island, big enough to shelter the animals from salt and sun, and to supply them with sufficient provisions—as setting sail about 40 million years ago. The ever-spreading Atlantic, now almost 3,000 km at its narrowest, was probably only 1,500 km wide then. In 1999, Canadian primatologist Alain Houle came up with hotly contested calculations that saw such a voyage lasting only seven to 11 days. So, multiply that number by two: still improbable, de Queiroz agrees, but ever more believable. After all, it had to have happened.