More on that 3,600-page novelized memoir 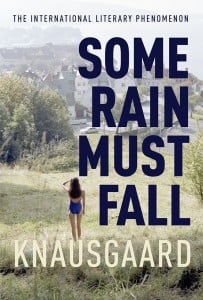 SOME RAIN MUST FALL

Anyone who covets the life of a bestselling, celebrated author should feel considerably less envious after reading this book. The fifth of six volumes in Knausgaard’s enormous set of autobiographical novels, My Struggle, it takes readers through narrator Karl Ove’s long slog from 19-year-old writing student to thirtysomething published author. After he is belittled and patronized at his writing academy in Bergen, Norway, he recognizes his own failings, comes to resent friends who become successful, battles writer’s block, eventually publishes a novel . . . and then is resented in turn by his peers, hates himself for giving fatuous interviews, and succumbs to writer’s block again. Through it all, he’s perennially insecure, and his binge drinking leads to petty theft, infidelity, violence and self-harm.

Not that we’re reading directly about real events: as he does in Book 3 (Boyhood Island) Knausgaard warns us that his memories are scattered. Still, his recreation is so vivid, with every detail rendered in high resolution, it’s hard to fathom it didn’t all happen exactly as he tells us. Knausgaard is uniquely gifted at imagining his own life—and obsessively devoted to the process. Fearless of regilding the lily, he takes advantage of the series’ elliptical chronology to revisit events from the first volume, A Death in the Family, which depicted the aftermath of his father’s passing. That book portrayed his grandmother as senile, frequently soused, and smelling of urine; she’s painted more positively here. Indeed, he has admitted softening his descriptions in later volumes due to relatives’ ire. Everyone in this book comes across as essentially decent—apart from his father, a few minor characters, and especially poor Karl Ove.

And yet, damned if Knausgaard doesn’t draw us in. His prose, shot through with run-on sentences, encourages us to read the book’s 663 pages quickly, as does his project of disavowing artfully contrived literary form and such fripperies as metaphors and symbols. You’re not really worried whether that “plump, lightly clad” couple unloading flowers from a camper van on page 13 will reappear (spoiler alert: they don’t), or whether you need to interpret their presence. The procession of new but peripheral people echoes real life, and Karl Ove’s everyday trials and occasional triumphs shed light on our own.

My Struggle evokes the contemporary search for meaning: this is literature in the age of the Facebook timeline and the Fitbit. We may not all write 3,600-page autobiographies, but we do relentlessly catalogue our lives. Knausgaard’s achievement offers hope that all of this banality, collected together, can be transcendent, that somehow all of the traces we leave, and the traces others leave on us, will ultimately signify something to someone. Or as Karl Ove drunkenly reflects, “Inwards, that was the new outwards.”