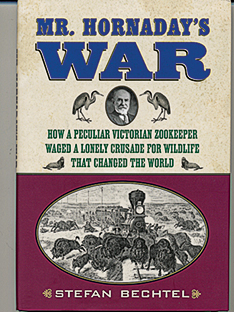 Contemporary Westerners, looking back a century to the imperialistic (in every sense) heyday of their ancestors, have a hard time understanding either the wide-scale slaughterfests of big-game hunters—Teddy Roosevelt and his son Kermit killed 512 large animals between them on their infamous 1909 safari—or the public indifference that greeted them. That’s particularly true of North America, where the wholesale destruction of wildlife was going on within national borders. The bison, the iconic animal of the western plains, was driven down from 30 million animals to near extinction within a single lifespan.

And the buffalo might well have disappeared from the face of the Earth if it hadn’t been for the pugnacious William Temple Hornaday, a noted hunter and taxidermist who was shocked to his core when he realized bison extinction was imminent. Once converted, Hornaday turned himself into the template of a militant eco-activist and embarked on a half-century of trench warfare. He established small buffalo herds when he could, attacked the gun lobby, waged the Plume Wars against the fashion industry’s bird-decimating demand for feathers for women’s hats—and, above all, fought public apathy. He ended up founding the National Zoo in Washington, and serving as director of the celebrated Bronx Zoo for 30 years. And there he displayed a human being—a pygmy from the Congo named Otengo—in a cage, as an exhibit.

Bechtel—who rightly admires not just Hornaday’s immense energy but his ethics, his uphill crusade to instill a sense of moral responsibility into the American attitude toward wild animals—struggles mightily with what he calls “one of the most morally repellent incidents” of the time. It’s the blatant racism, of course, that appalls Bechtel. But it’s possible that some of Hornaday’s spiritual descendants may see it from a different angle. Our outrage at seeing a man in a cage—implying not just that he is an animal, but thus lacks all moral rights—should be extended to seeing actual animals in the same situation. It’s not inconceivable that Hornaday, reborn today, would agree.