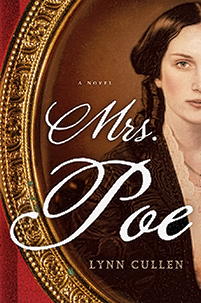 In this reimagining of the tortured triangulated relationship between Edgar Allan Poe, his wife, Virginia, and his purported mistress, Frances Sargent Osgood, Cullen delivers a clever tale in the 19th-century tradition of the Gothic bard himself. But it’s a story also nicely laden with 21st-century sensibilities at a time when Poe’s work is undergoing a revival. The primary one is its first-person telling by the “other woman,” a popular magazine poet and author today little remembered beyond rumours of her scandalous adultery with Poe.

Poe and Osgood met in 1845 in New York City when he was at the peak of his social and literary prominence. His poem “The Raven” was all the rage; its dark, complex author was routinely gossiped about by society ladies, despite his marriage to his sickly, much younger cousin. Osgood was trying to carve out a career after being left by her bounder husband, the painter Samuel Stillman Osgood, with debts and two young daughters. Her reputation was preserved by family friends who took her in after her Boston Brahmin family disowned her. Poe became a champion of Osgood’s work, though his interest quickly turned personal. Their increasingly flagrant relationship raised eyebrows, to the chagrin of Virginia, a woman more steely and manipulative than her ingenue appearance suggests. She cultivated her own relationship with Osgood, which quickly turned ominous.

At times, Mrs. Poe can read like a highbrow Harlequin, with florid sentences such as, “His raw yearning thrilled and terrified me.” Cullen’s greater success is her rich, carefully researched rendering of the literary New York of the era. She depicts the gaslit streets of lower New York where abortionists and Astors lodged in proximity and the salons where phrenology, mesmerism and “Lisztomania” were hot topics. Likewise compelling are her sketches of the literary lions of the day, among them the conniving editor Rufus Griswold, who later wrote a biography painting Poe as a depraved, drunken madman, a view only recently challenged. What role Osgood played in Poe’s life is also up for debate. Now with this clever amalgam of fact and fiction a new baseline has been drawn.