Mummy, what does cisgender mean? 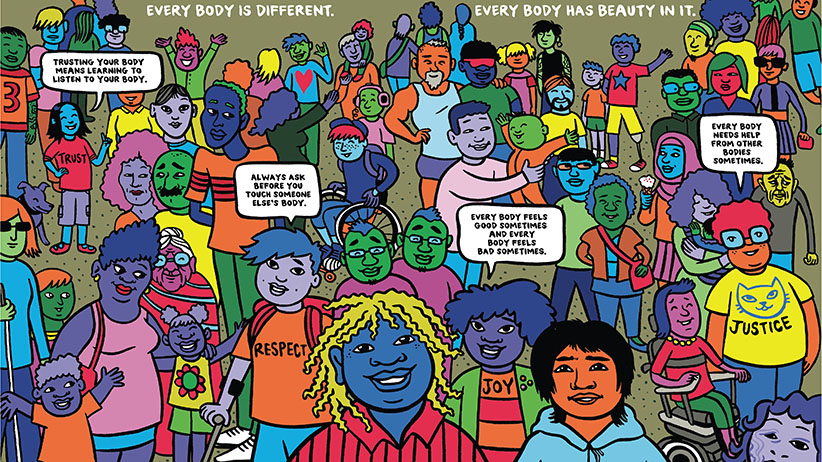 “The first thing you should know about sex is that it’s a word,” writes Cory Silverberg, Toronto sex educator and author of Sex is a Funny Word. This educational kids’ book, in bookstores this month, stars four children of different genders, races and abilities. It tackles the usual—changing bodies, fuzzy hair, extra nipples—before it dares go where few other kids’ books have gone. “Having a penis isn’t what makes you a boy,” it reads. “The truth is much more interesting than that!”

As such, it may be one of the first kids’ sex ed books—it’s aimed at eight- to 10-year-olds—to explore the concerns of transgender and gender-diverse youth. Silverberg’s last book for kids, What Makes a Baby, touched on sperm donation and unconventional families, but Sex is a Funny Word takes a big step into gender and identity politics. “When we are born, a doctor or midwife calls us boy or girl. But that’s based on our outside, our cover, and who they think we are,” Silverberg writes. “What about who we think we are?”

Silverberg is posing big questions at a crucial time. In the age of Caitlyn Jenner (formerly Bruce) and Orange is The New Black’s trans star, Laverne Cox, trans awareness is slowly filtering down to younger ages; Stealth, the story of a 12-year-old transgender girl, screened this year at the TIFF Kids Film Festival. This week TLC launched I Am Jazz, a show starring 14-year-old transgender activist and author Jazz Jennings.

Gender as a spectrum, rather than a binary, is a very comprehensible concept for today’s kids, Silverberg argues. According to a poll of 1,000 Millennials conducted by the media company Fusion, 57 per cent of females and 44 per cent of males aged 18 to 34 believe gender is a spectrum. Long before then, however, children understand. “Kids don’t have the language, but they’re in the playground, they know there are boyish-girls and girlish-boys,” says Silverberg. “They’re actually very open, and some people are afraid of that.”

RELATED:
Today’s Parent: Sex Is a Funny Word: A must-read for kids…and parents

Those people are usually parents, says Christine Baldacchino, a nursery teacher in Toronto. “There was a four-year-old boy in my class who really loved this gold dress,” she says. “One day, his mom saw him and told the director she didn’t want him wearing it.” Because the director thought it would be easier, she removed it from the dress-up centre. “For days, he asked about his favourite dress—where it went, if it was out getting cleaned or fixed, if it was coming back.”

Eventually, the boy caught on. “He said, ‘If you bring the dress back, I promise I won’t wear it,’ ” says Baldacchino, once a tomboy and very familiar with gendered rules of play. “It broke my heart, so I wrote a book about it.” Morris Micklewhite and the Tangerine Dress was released by House of Anansi’s Groundwood imprint in April 2014 to glowing reviews—mostly. “A librarian told me that a boy had taken out the book and his mother made him return it,” says Baldacchino. “She proceeded to try to get the book taken out of the library.”

Baldacchino had trans kids in mind but speaks equally to “cisgenders”—those who identify as the gender they were born with, i.e. most of us. Grown-ups don’t always appreciate the ambiguity. “Many parents want an answer as to whether Morris is gay or trans. I don’t know,” she says. “He’s only four.”

There are many kids like the fictional Morris, but only a few of these children will make a full gender transition, says Miriam Kaufman of the new Transgender Youth Clinic at Toronto’s Hospital for Sick Children. In the meantime, she says that hormone blockers “give young people some breathing space to think about their identity and live in their body as it is.”

Books like Baldacchino’s and Silverberg’s, which was brought to Kaufman for expert input before publication, represent shifting ideas and the inevitable parent-kid conversations around them. “This is a great opportunity for parents to have a talk that doesn’t use the word ‘I,’ ” says Kaufman.

Silverberg also invited kids as early readers. They embraced Sex is a Funny Word, he says. “The book is awesome because you put lots of effort into it,” said eight-year-old Bronwyn from Ottawa. “One of my favourite things is that all of the people were different.”