An editor's lifelong struggle with anxiety 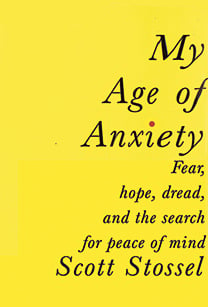 My Age of Anxiety: Fear, Hope, Dread and the Search for Peace of Mind

Several people who know Stossel were surprised to learn he was writing a book about anxiety. He seemed so “even-keeled and imperturbable,” they would tell him. Stossel would “smile gently while churning inside.” The 44-year-old editor of The Atlantic magazine has managed most of his life to hide an anxiety disorder that has led him to three decades of therapy and myriad medications (including, at least once, cocaine). Fortunately, it also led to the research and thoughtfulness that produced this book, in which Stossel presents multiple understandings of anxiety through the ages, from Plato’s belief that it reflects a malady of the soul to theories that it is rooted in physiology, the result of a person’s genes or levels of serotonin.

Stossel bravely recounts anecdotes from his own lifelong struggle with anxiety—sobbing in the backseat as his parents drove him to college; nearly collapsing at his own wedding; bumping into John F. Kennedy Jr. in a country home in Cape Cod while not wearing pants, following an episode involving Stossel’s “nervous stomach” and a malfunctioning toilet. Stossel suffers from extreme emetophobia, a fear of vomiting, and has structured much of his life around avoiding having to throw up (the last time he did was in March 1977). He keeps motion-sickness bags and Pepto-Bismol on hand at all times, and stays up to date about any outbreaks of stomach viruses around the world, be they in “nursing homes in New Zealand, cruise ships in the Mediterranean, [or] elementary schools in Virginia.” He becomes panic-stricken before giving talks, and is only able to survive public appearances with a very specific cocktail of Xanax, Inderal and vodka. He has trouble reassuring his young daughter before flying, being terrified of turbulence himself. It is kind of amazing how successful Stossel is, given all that he copes with.

And yet there is no undertone of self-congratulation in this book. Instead, he is simply reporting, on anxiety and on himself. He wonders if writing about his ailment is akin to perseverating and will thus make him worse. He wonders if the discovery that he is genetically predisposed to anxiety is cause for relief or despair. He wonders if he will ever overcome anxiety. In any case, one thing is clear: he means to keep trying.