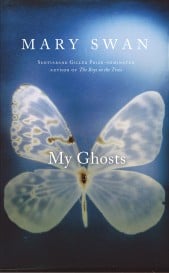 Swan’s novel, an unabashedly melancholy family saga, begins and ends with a woman named Clare—or rather, two women who share a name and a past but are separated by generations. The first is a 16-year-old orphan in 1879, sharing a house in Toronto with her siblings, while the second is a widow in the 21st century, learning to live on her own. In between them, their family divides and expands, its members hardly aware of each other, yet Swan reveals what connects them: common experiences of loss and disappointment, but also of survival.

Like Swan’s debut novel—The Boys in the Trees, a Giller finalist in 2008—My Ghosts offers shifting perspectives. First there’s Clare, who is haunted by ghosts. These aren’t literal apparitions of the dead, but persistent memories of lost loved ones: her parents and her oldest brother, Wee Alan, who died when the family immigrated to Canada, and also Ross, a still-living brother who ran away to start a new life elsewhere. The narrative moves to Clare’s sister Kez, then tumbles forward in time to Ross’s daughter, Isabella, and to Isabella’s daughter’s husband, continuing like this until we reach the contemporary Clare. Along the way, ghosts are exposed, not just as lost loved ones, but as lost ersions of ourselves—lives we could have led but didn’t.

Swan is an expert at conjuring the inner lives of her characters, the way they cling to the smallest slights, and their memories bend with a bit of imagination. And she evokes images with emotional force. The young Clare imagines heaven as “something like a fold, like the part of a let-down hem that has stayed as bright and clean as it was in the beginning.” She thinks maybe there’s a hideaway like this in time, “a sort of sidestep that lets you stay with the ones you loved.” Swan’s prose draws us forward despite the limitations of the book’s structure, which abandons characters before their stories feel finished. Though maybe that’s the point; in real life, too, resolutions are scarce and lives often end without ever seeming complete.