A review of My Life In Middlemarch by Rebecca Mead 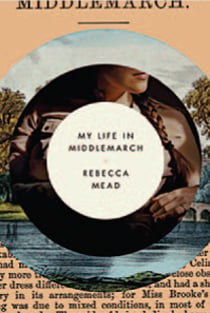 My Life in Middlemarch

You couldn’t ask for a better guide through the intriguing life of novelist George Eliot than British-born Rebecca Mead, a staff writer at The New Yorker, who first read Eliot’s Middlemarch as an ambitious schoolgirl growing up in the same countryside where Eliot once rented accommodation.

Twenty-five years on, Mead continues to reread Middlemarch, a novel she loved for its psychological insight and the snap of its sentences. She still identifies with its characters, and more and more so with Eliot herself, born Mary Ann Evans in 1819.

Mead and Eliot have a number of things in common and their similarities are the theme that ties together this memoir and biography. Both women were middle-aged when they met the love of their life. Both fell in love with men named George. And both women assumed the role of stepmother to three boys, the sons of their Georges.

Mead married George Prochnik, a writer; Eliot cohabitated with the writer George Lewes, the man credited with encouraging her to write fiction. Eliot was 51 when she began work on Middlemarch, explaining to a friend that she hadn’t taken it up sooner because “I was too proud and ambitious to write. I did not choose to do anything of that mediocre sort which I despised when it was done by others.”

The name under which Eliot became famous was a tribute to Lewes. “She was George because he was George,” writes Mead, noting that an early biographer, Blanche Colton Williams, believed that “Eliot” was a further concealed honouring: “To L—I owe it.”

Like Mead, Eliot began her career writing acerbic profiles of public figures and she could be scathingly unkind. “It’s one way for a young writer to get attention,” writes Mead. “It’s oddly reassuring to?.?.?.?realize that she also had a frustrated ferocity that it gratified her to unleash, at least until she found her way to a different kind of writing.”

Much has been made about Eliot’s plain looks. Henry James described her as “magnificently ugly—deliciously hideous.” Mead steps in sympathetically. “I was pale and thin,” and she still remembers the time the mother of a pretty friend suggested she was no beauty. She developed her mind instead. “I sought to align myself with the kind of intelligence I found in Middlemarch. I loved Middlemarch and I loved being the kind of person who loved Middlemarch. It gratified my aspirations to maturity and learnedness.”

FILED UNDER: book reviews My Life In Middlemarch Rebecca Mead The New Yorker