Nearly everything we know about a famous murder is wrong 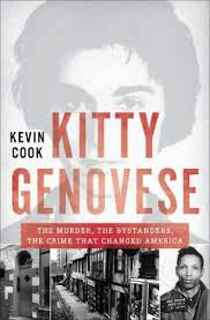 KITTY GENOVESE: THE MURDER, THE BYSTANDERS, THE CRIME THAT CHANGED AMERICA

Her death has had something for everyone. She is mentioned in both SuperFreakonomics and Malcolm Gladwell’s Tipping Point; she has inspired movies, songs, comic books, and at least two episodes of Law & Order. She has been the basis of as much theorizing by psychologists as any individual of the 20th century, give or take Hitler. It almost goes without saying that nearly everything we know about her is wrong, as Kevin Cook demonstrates in this short book.

Kitty Genovese was fatally stabbed near her New York apartment building early in the morning of March 13, 1964. Her attacker, Winston Moseley, dragged her into a vestibule and raped her. Many in the building and across the street saw or heard the attack, but it was intermittent—Moseley left to move his car at one point—and it concluded around the back of the building after an initial confrontation in the front. Few could have realized a serious assault was happening.

But a cop gave a New York Times reporter a tip that 37 people had “seen” the murder, and city editor Abe Rosenthal, who comes off as pretty much the second-worst person in this book, got his teeth into the story. Rosenthal exploded the incident into a parable of urban inhumanity that soon found its way into every sociology textbook on the planet. (Somehow the 37 became 38 along the road from page A5 to American myth.) The murder was also pivotal to the development of 911 telephone services. The bigmouthed beat cop who inadvertently gave Kitty’s neighbours 50 years of grief—50 years and counting—had left out some awkward truths about the NYPD’s phone system.

Kitty’s life as a sweet-natured lesbian bar manager in Robert Moses’s bustling, dangerous NYC is outlined by Cook for the first time. Thanks to the reforms that followed her death, she occupies an honourable place in history, even though she survives mostly as a name and a famous photograph. The latter turns out to be a mug shot, taken when she was arrested for collecting a handful of illegal horseracing bets for customers of her bar. She would have turned 79 this summer. Her killer, thought to be the longest-serving prison inmate in the state of New York, turned 79 in Dannemora in March.