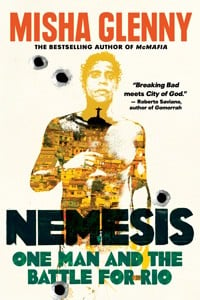 Nemesis. One Man And The Battle For Rio by Misha Glenny. No Credit.

Until his 2011 arrest, Antônio Francisco Bonfim Lopes, more commonly known as Nem, was one of the most wanted men in Rio de Janeiro—a powerful gang leader in one of the city’s favelas. But in Misha Glenny’s Nemesis, Nem is portrayed not as a hardened criminal but as a quintessential anti-hero. He enters a life of crime because he needs money to pay for his young daughter’s medical treatment, and the only way to secure a loan in his favela, Rocinha, is to ask the local gang leader. Later, when he become head of the same gang, Nem rules according to noble principles: he removes unnecessary guns from the streets, reduces violence, and establishes a makeshift welfare state. He brings in something like stability, to the point that Glenny’s descriptions of the favela during his reign—as “a venue for cool events and a destination for cool people” and the home of a gay pride parade and bustling nightlife—sound like gentrification achieved through benevolent drug dealing.

Nem is incarcerated in a maximum-security federal penitentiary, and Glenny, whose previous book, McMafia, looked at how global organized crime has thrived after the fall of the Soviet Union, conducted hours of prison interviews with Nem and spent months living in Rocinha. His book tells Nem’s life story and, through it, the story of Rio’s long struggle to lift its favelas out of poverty. Glenny does fall short in this second, larger project. His book calls out for more profiles of Rocinha residents with no connection to the drug trade so we can better understand why Nem was seemingly so beloved and why attempts to restore government control and bring services into the favelas have proven so difficult.

But Nemesis does offer a gripping profile of a criminal kingpin who works hard to represent himself as an altruist. As the book narrates the end of Nem’s reign, there’s enough evidence of Nem’s dark side—particularly in his treatment of women—to poke holes in that portrayal. Glenny’s sympathy for his subject is evident, but even he recognizes that his subject’s true nature remains an open question. Is Nem honourable? Or is he a dark man with the gift of charisma? For the reader, that mystery is at the heart of what makes him so compelling.