Book review: Never Look a Polar Bear in the Eye 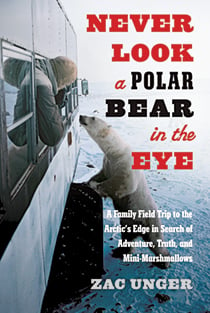 American firefighter and author Zac Unger always wanted to be an eco-adventure warrior who would save the polar bears from extinction and reverse climate change. But after shadowing a few polar bear experts and having his beliefs about environmental activism upended, he instead wrote this hilarious book about the process of becoming disillusioned in Churchill, Man.

The way into the story is Unger’s concern about the bears’ struggle to survive the Arctic’s increasingly long summers, before they can head out onto the ice to hunt seals, their only source of sustenance. But what if seals weren’t the bears’ only food? What if they could adapt to survive by adding geese, eggs, berries, starfish and even caribou to their diet? Unger didn’t want to know. He wanted to worship the celebrity scientists of the environmental movement who refused to entertain anything other than a doomsday prophecy.

Then he met “Rocky”—Robert Rockwell, a population biologist. Rockwell planted in Unger a kernel of doubt about the math used in polar bear population projections. To investigate the conflict, Unger took his wife and three children to the polar bear hub of the world for tourist season.

Nothing is safe from Unger’s comedic assault, including his own man crushes. Churchill’s portly residents are shown no mercy, and neither are the tourists, among them a racist Saskatchewan farmer. There are vivid portraits of the public relations flacks, bear wranglers and earnest activists who enliven the town. It’s a circus, and Unger treats it accordingly. Ruefully he notes that actual bear watching is a poor substitute for watching a show about bears on television.

The commercial bear scene in Churchill, he concludes, is just adrenalin tourism masquerading as environmental activism. But Unger knows the last thing the polar bear movement needs is another shrill voice. His book—breezy and disarming—is barely recognizable as an issue book. It’s that funny. But it kinda sneeks up on you, just like a polar bear.