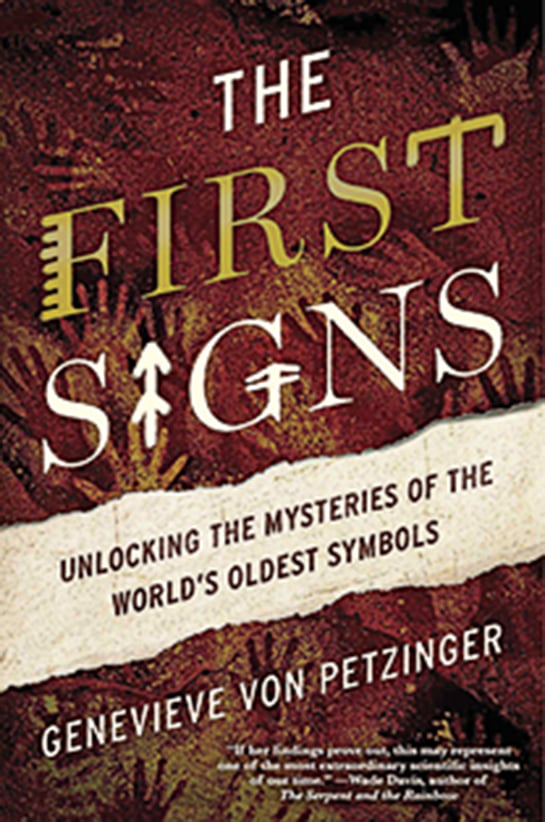 The cave art of Europe, the beautifully rendered Ice Age animals that stretch back more than 40,000 years, have fascinated scholars and everyone else since their rediscovery in the 19th century. The art has provided fodder for all sorts of theories, including the concept of the “creative explosion,” the idea that the art marks the sudden emergence of fully modern minds among our Homo sapiens ancestors, people who had already had fully modern bodies and brains for 150,000 years. No one, at least among paleoanthropologists, believes that now, and one of the many virtues of von Petzinger’s lively account is to provide a snapshot of the current consensus.

The Canadian archaeologist is interested in the less aesthetically overwhelming parts of the rock art record: not the animal figures but the geometric signs. Computer programs have allowed her to amass a database of 5,000 such signs from almost 400 sites across Europe, and, incidentally, to become a rock star among rock art experts, a TED fellow and recipient of Templeton Foundation funding while still a doctoral student.

Thirty-two of those 5,000 signs—dots, spirals, triangles, parallel lines, circles, depictions that look like modern letters (x, w, y) or the @ symbol in email addresses—were in use across Europe for the entire 30,000-year time span of the Ice Age. They clearly weren’t doodles or merely pleasing shapes: they said something to the people who drew them. What’s more, two-thirds were in use at the oldest sites, meaning they cannot have been invented by Europe’s new settlers after they arrived from Africa some 45,000 years ago. Instead, the signs must have come with them. That realization and recent discoveries of geometric markings in a 100,000-year-old site in South Africa have radically pushed back the date of our mental complexity—our minds may not be exactly as old as our brains, but the match is very close.

Von Petzinger acknowledges that the possibility of ever really knowing what the signs meant is vanishingly remote. Yet they are promising avenues, she argues. If the signs came out of Africa, they went to China too, where a recent excavation found turtle shells with engraved markings. Dating to 9,000 years ago, when cultures there were already moving toward a settled existence, from which would emerge a highly symbolic alphabet, the engravings may offer a thread, however tenuous, between rock art and later script, a window into ancient minds.