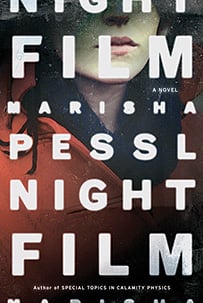 Readers riveted by Pessl’s debut outing, Special Topics in Calamity Physics, waited seven years for a second fix, and it’s easy to see why. The new novel is intricately plotted, nicely paced and scattered with “extras” that blend fluidly into the story—screen grabs of authentic-looking-but-fabricated magazine and newspaper stories, phone book scraps, message boards from a locked site on “the anonymous Internet”—with photos staged by actors Pessl is said to have auditioned herself.

The book is narrated by Scott McGrath, a 43-year-old divorced dad and freelance journalist who five years earlier was blackballed after attempting to investigate the cult horror filmmaker Stanislas Cordova. When Cordova’s 24-year-old daughter, Ashley, dies in an apparent suicide, McGrath is driven to reopen his files, determined to understand something an anonymous source told him about Cordova: “There’s something he does to children.” McGrath acquires two sidekicks—the handsome Hopper and the naïve Nora, both in their 20s—and the three set off on a caper through New York and environs that includes a visit to a secret sex club and Cordova’s sprawling estate, where all his film sets are still intact. Pessl does a fine job bringing to life the many souls they meet along the way—taxi drivers, Chinese grocers, tattoo artists and burnt-out detectives, each with a backstory and quirks and personal issues.

But where Special Topics delivers intrigue until the very end, landing a sucker punch so breathtaking this reader had to flip through the last pages several times to make sure Pessl wasn’t kidding, Night Film veers to the philosophical. Rather than definitively resolving McGrath’s main concerns—What, if any, diabolical acts is Cordova guilty of off-screen? How do they relate to Ashley’s death?—Pessl opts to meditate more on why people seem to prefer a horror story to real life. A worthy meditation, to be sure, but for all the author’s literary skill, this book is a mystery novel, the most important job of which is to answer every question it raises.