Beloved by writers, No Alibis has sparked a bona fide crime fiction scene in Belfast 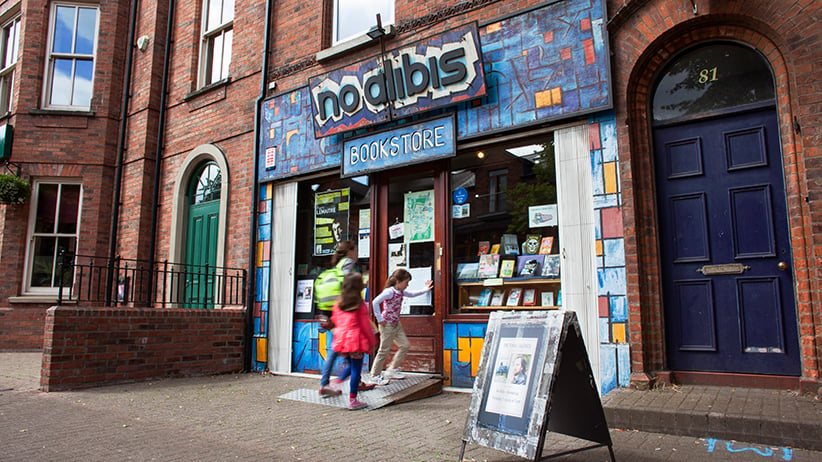 “Before we start, does everyone have a Jammy Dodger?” asks David Torrans, the owner of No Alibis bookshop in leafy South Belfast, Northern Ireland, where Jammy Dodgers are a popular brand of tea biscuits. Torrans was hosting another standing-room-only event last month, this time to kick off the Belfast Book Festival. A plate of cookies circulated, putting a smile on every face and illustrating at least one reason why No Alibis is a magnet for both crime fiction writers and their fans, and the last bricks-and-mortar shop of its kind in the U.K.

It’s the curious case of the indie bookshop with a healthy pulse. The first clue is the eight-by-five-foot painting of Columbo on the ceiling. It had to go on the ceiling, because the walls are stacked high with hardboiled detective novels, gritty thrillers and whodunits. The second clue is the kettle. It’s always boiling, making free tea and coffee for customers. The third tipoff is the familiarity between Torrans and his customers—chatty friends who know one another by name.

“People thought I was mad when I opened No Alibis in 1997,” recalls Torrans, “but I knew we could be unique enough to attract people away from the chain stores and something new called Amazon.” It worked. Torrans started attracting far-flung crime fiction devotees and launching books for big-name authors, including James Ellroy and Michael Connelly. Clients appreciate Torrans’s customized reading lists. “David is like a drugs pusher for books,” jokes Brian McGilloway, a celebrated Northern Irish crime writer who gives full credit to Torrans for starting his career. “If you go in and buy two or three books, he’ll throw in one for free. It’ll be the first book in a series, to get you hooked. He got me with Ian Rankin’s Black and Blue.”

Today, the shop is a hub for a group of crime writers, including McGilloway’s friends Stuart Neville and Gerard Brennan, who got their earliest inspiration from the community built around No Alibis. Indeed, there has been an explosion of Northern Irish crime writing in the last 10 years. “I have this theory that you don’t need crime fiction if your country is in turmoil,” says Scottish author Ian Rankin, who recalls Torrans’s mom and dad serving homemade cake at his book launch in 1997. “But when a country is coming out of turmoil, that’s when crime writing emerges to tell you the story of what just happened. We saw it in South Africa, post-apartheid.”

“It’s much like American writing about Vietnam,” says author Charles Foran, who teaches Irish literature at the University of Toronto. “It took a few years for people to settle their thinking, then there was a wave of writing about the Vietnam War.”

Belfast author Glenn Patterson thinks there’s a simpler catalyst. “When a group of writers emerges—like a school of poets, for example—it’s about having company,” says Patterson. “It’s really about support, and No Alibis gives that support.”

The only notable crime fiction writer on the scene when Torrans opened his shop was Colin Bateman, who later featured No Alibis in his successful Mystery Man series. The four books, published from 2009 to 2012, are narrated by the (unnamed) owner of No Alibis, who becomes a reluctant private detective. He’s also an acerbic, paranoid hypochondriac. An annoyed Torrans stopped selling Bateman’s books. “Dave gave me carte blanche with the character, his only stipulation being that I didn’t make him a pedophile,” says Bateman, via Facebook. “I thought we were both in on the joke, but maybe it wore thin for him.” Torrans doesn’t like to discuss it. “I don’t think it hurts his sales,” he says. “All I’ll say is I’m uncomfortable with the way the shop was being represented in fiction.”

Just then, a Belfast-based portrait artist known for painting Liam Neeson walks over to discuss the new calendar he’s making for No Alibis. It isn’t a commission; it’s a gift. “Anything I can do to help this place tick over, I do,” says Neil Shawcross, who haunts the shop on Saturday mornings. Actors from the nearby set of Game of Thrones also pop by on their day off. “Some of them didn’t start out as fans of crime fiction, but they are now,” smiles Torrans. “Want another biscuit?”

FILED UNDER: Belfast No Alibis