The War through Afghan Eyes 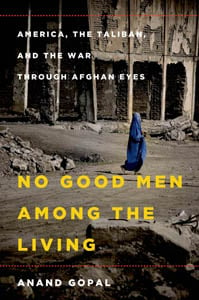 NO GOOD MEN AMONG THE LIVING: AMERICA, THE TALIBAN, AND THE WAR THROUGH AFGHAN EYES

A little before dawn one night in May 2002, American and Canadian special forces descended on the Afghan village of Band-i-Timor, shot at least three of its inhabitants and took 50 of them away in trucks and helicopters. One captive, an elderly tribal leader and anti-Soviet war hero named Hajji Burget Khan, died in transit, or later at the Kandahar Airfield, “reportedly from a [rifle] butt stroke to the head,” according to a Canadian dispatch. The rest were abused and humiliated during five days of interrogation before being released.

Despite not finding anyone worth keeping, American officials called the raid a success, noting that Burget Khan had been meeting with Taliban officials. This was true in the sense that Burget Khan—who had indeed struck alliances with the Taliban in the past—was now trying to convince former Talibs to support the new government of Hamid Karzai. The accusations against him had come from a rival tribal leader who had ingratiated itself with the Americans and was becoming rich and powerful by producing “Taliban” for them to capture.

The incident illustrates a major theme running through Gopal’s book: America’s insistence on slotting Afghans into neat categories, and Afghanistan’s more ambiguous reality. Woven through its narrative are the personal stories of three Afghans: a Taliban commander; a pro-American strongman and politician; and a housewife who becomes a senator—or, as the Americans might classify them, our enemy, our ally, and a civilian. Gopal’s portrait of the Taliban commander, known as “Mullah Cable” because of his preferred tool for beating villagers who didn’t produce guns and money, is the most compelling. Gopal met regularly with the Talib, who gradually opened up to him. The character that emerges is not sympathetic, but human.

Gopal falters slightly in his big-picture analysis. His contention that by the spring of 2002 the Taliban had “ceased to exist” is an exaggeration. As early as December 2001, Taliban commanders, and their patrons in Pakistani intelligence, met in the Pakistani city of Peshawar to plan the coming insurgency. Many Afghan Taliban might have been willing to lay down their arms following their initial defeat, but Pakistan, which had largely co-opted the movement, remained intent on continuing the war.

Still, Gopal’s chronology of how America’s deadly incompetence and the predatory graft of Afghan authorities drove many Afghans to despair or rebellion is the product of sustained and impressive shoe-leather reporting. This is a valuable book.

FILED UNDER: Afghanistan Anand Gopal No Good Men Among the Living