Novelist Colson Whitehead takes on the World Series of Poker

Review of The Nobel Hustle, by Colson Whitehead 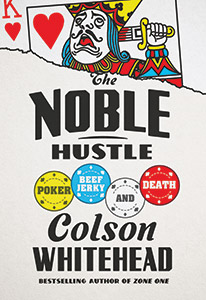 In the spring of 2011, Grantland, an online sports and culture website owned by ESPN, sent the novelist Whitehead to Las Vegas to play in and write about the World Series of Poker. The story he came back with—published in three parts that summer—was a bizarre little masterwork of one-liners and observational self-loathing. “I have a good poker face because I am half-dead inside,” it began. “My particular combo of slack features, negligible affect, and soulless gaze has helped my game ever since I started playing 20 years ago.”

That opening remains unchanged in The Noble Hustle, Whitehead’s book-length expansion of the Grantland series. The book contains both the original narrative—Whitehead training in Atlantic City and the Vegas tournament—as well as a set of long, new diversions. In one section, Whitehead recalls his first trip to Vegas. After he finished college, he and two friends (including the filmmaker Darren Aronofsky) drove across the American Southwest, writing for the Let’s Go travel guides. In other chapters, Whitehead eats with math-obsessed poker pros, trains with a yogi, and tries to find himself a poker nickname. (“Five-Dollar Colson,” is one he tries out, “referring,” he writes, “for once, not to my home-game buy-in but to what I’d charge for most acts if I ever started hooking.”)

The narrative in The Noble Hustle isn’t really the point, though. It’s a thin book. Not much happens. What makes it worth reading is the pure density of its brilliant quips. Whitehead writes as a resident of what he calls “the Republic of Anhedonia”—a country for the “the shut-ins, the doom-struck, the morbid of temperament.” He peppers the book with sly, dark jokes, most of them at his own expense: “I had recently finished writing a novel about a city overrun by the living dead,” he writes at one point, “and the plunge into autobiography had left me depleted.”

Whitehead’s novels, including most recently Zone One, a whip-smart New York zombie thriller, are among the most wildly original in American letters. There’s nothing in The Noble Hustle to compete with those; it’s more extended riff than impeccable masterwork. Still, when a writer with that much talent is having this much fun—as evidenced in lines like: “Sometimes you have to accept a casino trip for what it really is: an opportunity to see old people”—it’s always worth paying attention.