Alan Moore and literature's fascination with the fourth dimension 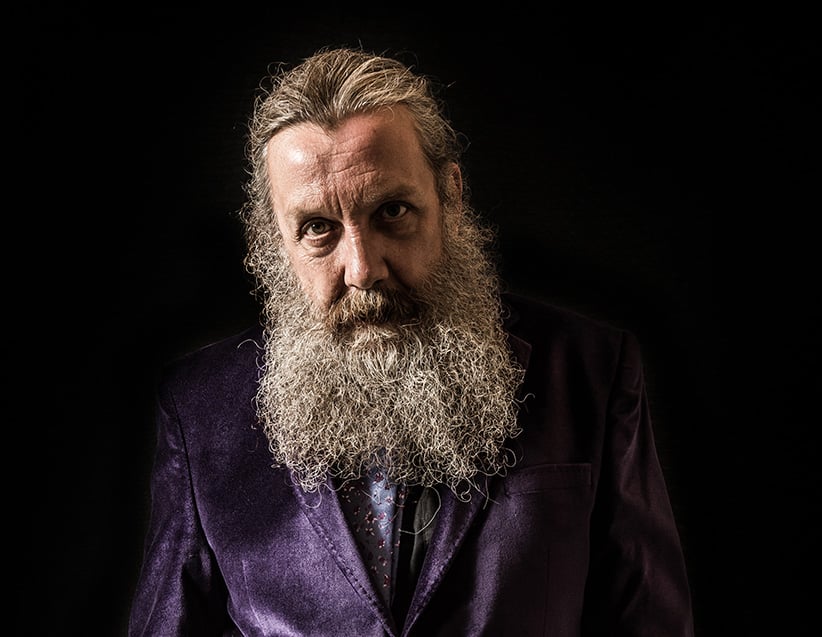 Alan Moore’s comic Watchmen has a fairly simple conceit. It’s a superhero story with only one actual superhero: Dr. Manhattan, a mild-mannered scientist (as per the comics cliché) who is reborn as a blue-skinned, balding, super-powered entity after fumbling into an Atomic Age experiment.

As a result of his transformation, Dr. Manhattan conceives of all of human existence—past, present and future—in unison. As he explains it, “Time is simultaneous, an intricately structured jewel that humans insist on viewing one edge at a time, when the whole design is visible in every facet.”

It is, perhaps, a heady idea: that time itself constitutes its own dimension, its passage perceptible to humans while its grander design remains hidden out of view. And yet Alan Moore is the perhaps the most conspicuously heady of comics authors, equal parts deconstructionist, postmodernist, and bug-eyed mystic oddball. The view that history possesses a discrete but invisible “architecture” (as it’s described in Moore and Eddie Campbell’s Jack the Ripper comic From Hell) crops up repeatedly throughout his work, as it does in his new non-graphic novel Jerusalem.

The exploration of this fourth dimension is the central concern of Moore’s exceptionally long, 600,000-word book—at least inasmuch as a tome of such varied indulgence, epic scope and sheer heft can be said to have a “central concern.” As he told The Believer in 2013, when he was in the final throes of completing Jerusalem, “pretty much all of the book is predicated upon the assumption, which seems to be implicit in the work of most modern physicists since Einstein, that we inhabit a universe that has at least four spatial dimensions.”

Moore is right to invoke Einstein, and other such “modern physicists,” in his understanding of the fourth dimension. In Einstein’s own words, his radical general theory of relativity “robbed time of its independence.” Yet, in art and literature, attempts to understand the fourth dimension predate Einstein, general relativity, or the emergence of the field of quantum mechanics. Since at least the late 19th century, artists flirted with these high-level mathematical abstractions, expanding the conceptual boundaries of their art, and warping the taken-for-granted concept of a workaday reality rendered in three boring ol’ dimensions. 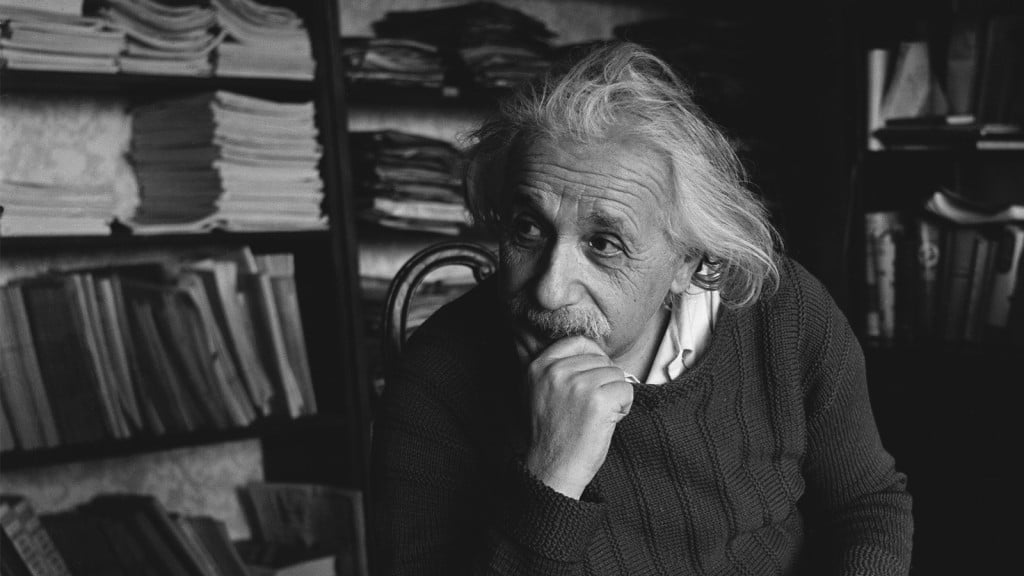 In 1920, shortly after the emergence of Albert Einstein’s rigidly quantified exploration of four-dimensional space-time, a letter to the editor in the British science journal Nature pointed to another, earlier, thinker whose writing seemed to anticipate Einstein’s discovery: Edwin Abbott Hinton.

A theologian by training and schoolmaster by trade, Hinton is now best known as author of the satirical novella Flatland, first published in 1884 to nominal attention. The basic premise of Flatland is restated, in densely accented cockney, in Jerusalem: subtitled “A Romance of Many Dimensions,” Flatland imagined a two-dimensional world inhabited by triangles and other flattened polygons (the story’s narrator is a square, named A Square) that is visited by a three-dimensional shape called A Sphere.

Through contact with the three-dimensional being, A Square begins to reckon with a universe of multiple dimensions: first three, then four, then six, and so on. As the letter in Nature put it, connecting Abbott to Einstein: “If there is motion of our three-dimensional space relative to the fourth dimension, all the changes we experience and assign to the flow of time will be due simply to this movement, the whole of the future as well as the past always existing in the fourth dimension.”

But Flatland did more than anticipate Einstein and general relativity. It also worked as a social satire, with the two-dimensional flatlanders hewing to a pecking order that reflected the Victorian social world. A Square’s revelation of a three-dimensional world are deemed heretical, illustrating the hostility that often greets radical, paradigm-shifting models of understanding the world (see: Galileo, Giordano Bruno, and so on). In Flatland, the notion of a three-dimensional space is seen as a threat, destabilizing the rigid hierarchies of knowledge and social class.

A different understanding of geometric space—less politicizing, and more mystifying—appears in Fyodor Dostoyevsky’s last novel, The Brothers Karamazov. There, the highly intelligent and deeply religious Ivan speaks of “geometricians and philosophers, and even some of the most distinguished, who doubt whether the whole universe, or to speak more widely the whole of existence, was only created in Euclid’s geometry; they even dare to dream that two parallel lines, which according to Euclid can never meet on Earth, may meet somewhere in infinity.”

For Ivan, the concept of a spatial dimension that extends past that of “Euclid’s geometry” is one of religious experience—the realm of God Himself, one beyond “the impotent and infinitely small Euclidian mind of man.” At one point in the novel, when Ivan suffers a nightmare about the Devil, he notes that Lucifer doesn’t wear a watch, as if such an appurtenance would be pointless in the domain of collapsed space-time he is presumed to inhabit. In Ivan Karamazov’s mystic mind, the fourth dimension is where the sins, inequities, confusions, and contradictions of our delimited, three-dimensional world are reconciled and resolved. 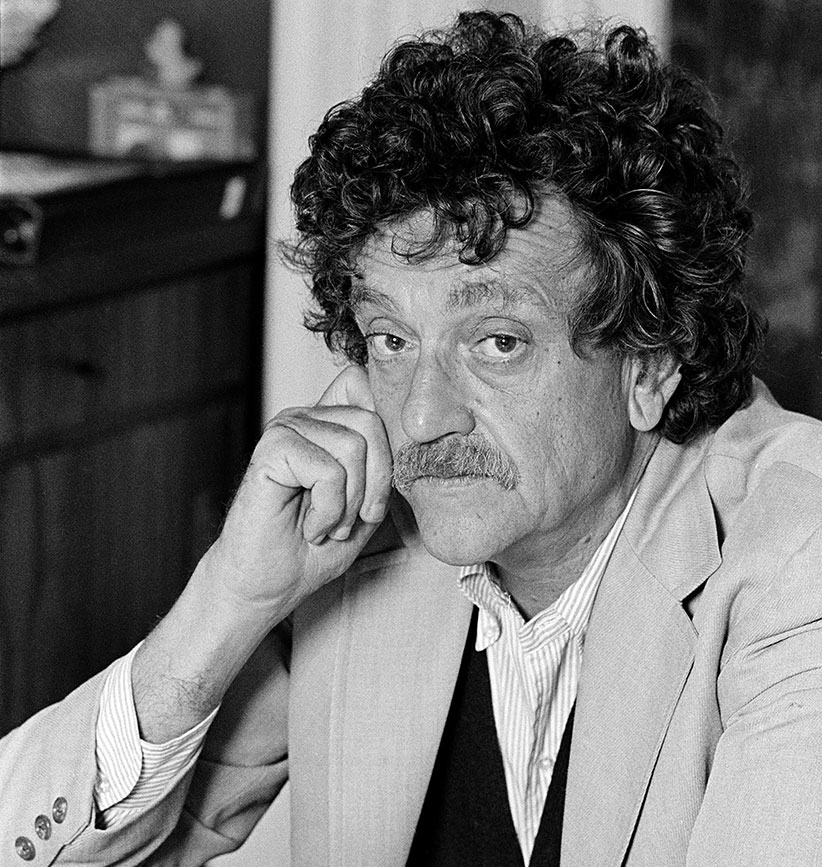 If there’s a recurring theme across the literature of four dimensions, it’s the exploration of possibility—the desire to express something seemingly inexpressible, to comprehend something that exists just outside the parameters of human comprehension.

Kurt Vonnegut considered this idea of space and time intersecting across some unseen horizon in his 1969 Second World War sci-fi satire Slaughterhouse-Five, in which a fumbling, fatalistic American solider named Billy Pilgrim is abducted by a race of aliens from the planet Tralfamadore. The Tralfamadorians experience all of time simultaneously, a perspective that Billy tries to express in a letter.

“All moments,” he writes, “past, present and future, always have existed, always will exist. The Tralfamadorians can look at all the different moments just that way we can look at a stretch of the Rocky Mountains, for instance. They can see how permanent all the moments are, and they can look at any moment that interests them. It is just an illusion we have here on Earth that one moment follows another one, like beads on a string, and that once a moment is gone it is gone forever.”

Among more contemporary fabulists, the reclusive postmodern meta-historical author Thomas Pynchon flirted with four-dimensional space in 2006’s Against the Day. Like Jerusalem, the book involves scores, if not hundreds, of characters and unfolds over an extended period of time. (It is also, like Jerusalem, a doorstopper of a novel; it clocks in as Pynchon’s longest, at nearly 1,100 pages.)

Against the Day is experienced primarily through a fictional club of aeronautical adventurers, the Chums of Chance, whose airship hangs above the events of the novel, seemingly able to travel through time. As in Hinton’s Flatland, the Chums enjoy a privileged, three-dimensional perspective not shared by other characters in the story. As one of their crew puts it, “We went from two dimensions, infant’s floor-space, out into town- and map-space, ever toddling our way into the third dimension, till as Chums recruits we could take the fateful leap skyward.”

Elsewhere, the novel is amok with anarchists, industrialists, physicists, and crackpot scientists, scuttling across America, Europe, East Asia, and elsewhere, in the period between 1893’s Chicago World’s Fair and the outbreak of the Great War. From the privileged perspective of the Chums of Chance, Pynchon seems to be observing the emerging themes and antagonisms of the 20th century—capitalism vs. communism, quantum theory, general relativity itself—in a kind of madcap kerfuffle.

Where Vonnegut uses the fourth dimension to shrug against the cruel inescapability of time and history, Pynchon holds out the hope of somehow changing it. The novel suggests that if only we could extract ourselves from being immersed inside history—say, by peering down upon its patterns from an airship dangling safely above the action—we might be able to more fruitfully forecast (and forestall) its great tragedies.

As if to underscore this theme of perspective, Pynchon also introduces a fourth-dimensional ripple in Against the Day. The Chums are themselves visited by characters called “Trespassers,” whose presence in the realms of workaday three-dimensional perceptions “had been owing only to some chance blundering upon a shortcut through unknown topographies of Time.”

In Jerusalem, Moore makes these mysterious topographies known. Here, the fourth dimension is both temporal and spatial—as much a way of seeing as a thing unseen. Moore’s fourth dimension is both conceptual (i.e., a collapse of temporal moments, like Vonnegut’s “beads on a string” or Dr. Manhattan’s “intricately structured jewel”) as well as a material plane, called Mansoul, invisible to the naked eye, home to all manner of mystical and supernatural creatures. It’s very much the stuff of escapist high fantasy, like a 4-D Narnia.

The extra-dimensional level of Jerusalem is place of “twisting crystals” and “ghost-seams” and afterlife academies, where characters use the made-up word “wiz” as linguistic copula that refers to something happening across the caved-in tenses of past, present and future. Back on the solid, three-dimensional footing of Earth, an eccentric artist called Alma Warren attempts to represent this mystical, magical realm, informed by recollections from her brother, who was transported there as a child.

The centrality of an artist to Jerusalem’s plot, as not only a key character but the one who charged with presenting the action of the story to the reader, further speaks to Moore’s interest in the philosophy, physics and aesthetics of fourth-dimensional thinking. Indeed, as Linda Dalrymple Henderson—author of The Fourth Dimension and Non-Euclidean Geometry in Modern Art—writes, the concept of an extra dimension (or dimensions) existing outside of perceivable material reality was “primarily a symbol of liberation” for visual artists of the late-19th and early 20th centuries.

For Moore, the fourth dimension reveals itself through art as a kind of magic. The author—whose official bio describes him as a “magician and performer,” even before it describes him as an acclaimed author—has spoken at length about art and magic, which he holds as “pretty much synonymous” with one another. As he put it in that Believer interview, “magic is, on one level, the willful attempt to alter those perceptions [of reality].”

The connection between the confounding science of the fourth dimension and wizardry also occurred to Einstein, who once wrote that, “The non-mathematician is seized by a mysterious shuddering when he hears of ‘four-dimensional’ things, by a feeling not unlike that awakened by thoughts of the occult.” The emerging notion of a fourth dimension in the 20th century shook the foundations of reality, and of the hard sciences. Physics—the domain of matter and motion, of how objects in the observable world operate—became conceptual. It didn’t just collapse time into space, but also the boundaries between what’s imaginable and what’s possible.

It’s in this long tradition that Moore’s ambitious, weird, unwieldy novel plunks itself. As the character Mick Warren notes, “imagining ourselves as soon from some superior elevation, some projected and omniscient point of view, is probably as old as literature, as old as civilization.”

If authors like E.A. Hinton and Fyodor Dostoyevsky were intuiting Einstein’s discovery, and followers such as Vonnegut and Pynchon grappled with the consequences of the theory of space-time, Alan Moore’s Jerusalem speaks to the abiding romance of many dimensions—not merely as an expression of the possibilities of mathematics and physics, or art and magic and literature, but as a grand metaphor for the very idea of possibility itself.