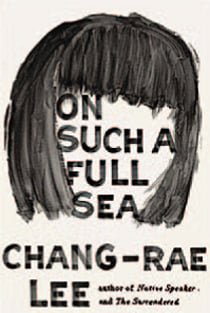 On Such A Full Sea

Long before he earned his spot in the upper echelons of the American literary elite, Lee was a twentysomething dreamer fiddling away on what would become his failed first novel. That book, according to an old profile, was futuristic and Pynchonesque, with elements of science fiction and fantasy. And it was, according to Lee himself, completely unpublishable.

Something from that project, however, seems to have lived on in On Such a Full Sea, Lee’s fifth novel, and his first since 2010’s The Surrendered, which was a finalist for the Pulitzer Prize. A fantastical, futuristic and, at times, deeply weird book—it features a murderous vegetarian circus troupe—On Such a Full Sea is also at points unexpectedly gentle and sweet. And though it is set several generations in the future, it contains a portrait of race and class in contemporary America as vivid and vital as any in recent fiction.

Still, it’s easy to imagine this book, too, would have been dismissed as unpublishable if someone without Lee’s success or pedigree had pitched it. Its constituent parts are all a bit unlikely. An Odyssean journey set in a dystopian American future, the novel is narrated in the first-person plural by the collective residents of B-Mor, a Chinese-American workers’ colony. The colony, in what used to be Baltimore, exists to provide food for wealthy “charter” villages that house the upper classes. In between are the Free Counties, an anarchic Middle America characterized by unchecked violence and rampant poverty.

The novel’s central story follows Fan, a young B-Mor resident, as she journeys out into the Free Counties and, eventually, into one of the charter villages, in search of her missing boyfriend, Reg. Her trip begins with a bang; she gets hit by a car on her first day. It doesn’t get easier from there. Throughout the book, Fan dodges danger and betrayal from, among others, her long-lost brother and a glassy-eyed socialite who keeps young women as pets.

Lee’s vision of the ceaseless strivings and anxieties of the wealthy in the charter villages is particularly tart. As a professor at Princeton, one imagines that’s not a world with which he’s unfamiliar. But On Such a Full Sea isn’t just social critique. It’s an adventure story, too. On the whole, it’s an important, enjoyable read, from an increasingly significant voice in American fiction.