Review: On the Map: A Mind Expanding Exploration of the Way the World Looks 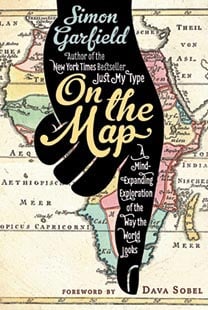 A British journalist, Garfield had a 2010 hit with Just My Type, a book about typefaces. (Before his big break he wrote good books about William Huskisson, the British politician remembered chiefly as the first person ever killed in a railway accident, and William Perkin, the dyemaker who accidentally revolutionized synthetic colour and became the first individual to get rich from chemistry.) On the Map, a compendium of anecdotes and reporting about the history of cartography, makes for a natural and satisfying follow-up. The illustrations, as one would expect, are especially delightful.

Garfield observes that his book arrives at a strange moment in the story of the map. We can now pull our location out of the ether at will, and look at made-to-order electronic maps of any place, asking for whatever degree of detail and abstractness we like. Google has, as one of its hundred little-noticed alterations of our neurology, integrated street-level photography with the traditional map. It might not be long before the two-dimensional map is altogether displaced from our consciousness. Perhaps modern “scientific” maps will become unfamiliar, like the allegorical maps of the medieval world with their dragons and sea monsters and religious symbols.

But with what effects? A Memorial University of Newfoundland humanities prof recently went public with data suggesting that many undergraduates cannot find Europe or the Atlantic Ocean (!) on a map without help. Does this imply, as one suspects, that much of the content of newspapers and history books is gibberish to these young people? Is it because paper maps have flown upward out of their lives into an electronic cloud? Older authors and editors—who themselves missed out on the excruciating geography drills their parents endured in school—may wish to study On the Map when considering how to help the Google-ized generation make sense of the physical world.