Book review: William Alexander's 'Flirting with French: How a Language Charmed Me, Seduced Me & Nearly Broke My Heart' 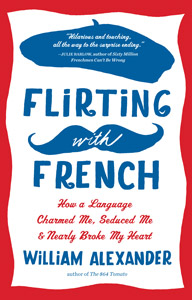 FLIRTING WITH FRENCH: HOW A LANGUAGE CHARMED ME, SEDUCED ME AND NEARLY BROKE MY HEART

You heard it here first: Learning French is hard, especially if you’re an American who missed the critical period for second-language acquisition by about 50 years. This is the case with author William Alexander (The $64 Tomato), who decided to give himself a year to learn French at nights, weekends and on vacations. If you, too, are looking for another way to procrastinate before taking a French class, read this book, which is replete with funny asides, linguistic history and plucky anecdotes about the blunders of being a late-in-life learner.

No one can accuse Alexander of not trying. He completes five levels of Rosetta Stone, he does weekend workshops, he Skypes with a French model (what dedication!), then he does two weeks of immersion at a serious language institute in the French countryside. Back at home in the Hudson Valley, he watches Québécois sitcoms. When his wife notices the French subtitles, he quips, “It’s their way of reminding Canadians they don’t really speak French.” Ouch. But IBM appreciates us. While trying to perfect computerized translation in the 1990s, the company’s Thomas J. Watson Research Center filled its database with Hansard translations from our sessions in Parliament, and learned from them, often to hilarious results. English Canadian politicians, for example, exclaim, “Hear, hear!” but French Canadian politicians say “Bravo!” so you can see how a computerized translation of “I hear you” ends up as “Je vous bravo.”

Alexander’s history of the French language and the Académie française is chatty and fun, but he has a petit problème, as he’s fond of saying, with readers on our side of border. Many of his witty observations about gender, tu-vous power plays and charming idioms have already occurred to Canadians by Grade 12 French class. Still, there’s comedic value in how he inserts his tale of learning French into his cardiac history of atrial fibrillation. As the book’s subtitle claims, French nearly broke his heart.