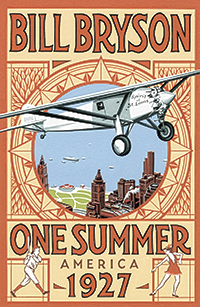 Just to hear of this book is to think of it as a sure-fire winning combination. What couldn’t so gifted a storyteller and effortless a stylist as Bryson do with the material on offer: Lucky Lindy, Al Capone, Babe Ruth, even the perversely entertaining Calvin Coolidge? One Summer, a detail-rich, thoroughly entrancing account of five eventful months 86 years ago—from Charles Lindbergh’s solo New York-to-Paris flight in May to Ruth’s 60th home run on Sept. 30—doesn’t disappoint in that regard.

But it also goes an unexpected step further. Bryson, focused on the story, leaves his book’s larger themes up to the eye of the beholder. American critics have been ecstatic. This was the year, many proclaim, that the U.S. stepped onto the world stage, the beginning of the American Century. An odd reaction, given that the United States had already been the richest and most powerful nation in the world for at least a decade. Bryson helpfully provides some of the key stats: more cars in Kansas than in all of France, the staggering fact that 40 per cent of world factory output originated in America. But not so strange, perhaps, in view of the U.S. penchant for visualizing its history, outside of wars, in terms of pop icons: the ’20s were the era, not of towering economic preponderance, but of (steroid-free) home runs and aerial heroism.

The most intriguing aspect of Bryson’s account, though, is the way it demonstrates a remarkable continuity between past and present. Nowhere is that more striking than in the terrible weather Lindbergh flew through to get his custom-built plane from California to the East Coast. The endless rains sparked the Mississippi flood of 1927, still the worst natural disaster in recorded American history, one met by the same haphazard government response—cavalier at best toward poor people, especially poor black people—as hurricane Katrina elicited.

The culture wars too were in full swing: one Midwestern city responded to women’s dramatically shortened skirts by threatening to jail flappers wearing them; the Scopes monkey trial foreshadowed today’s battles over teaching creationism; and, of course, America’s never-ending prohibitionist tendencies endure, albeit currently focused on drugs rather than alcohol. The more things change . . .