Our addiction to junk 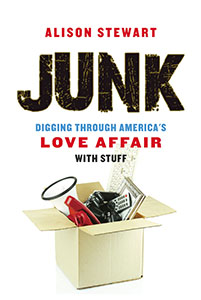 Between Hoarders, the show that debuted on A&E in 2009, the professional organizers who became popular at the same time and, recently, Marie Kondo’s “does it spark joy?” decluttering mania, it seems mainstream Western culture has spent the last decade or so facing up to the byproducts of our acquisitive culture.

Journalist Alison Stewart, whose first book, First Class, told the story of the first black public school in America, came to her own reckoning with “stuff” from a different angle: her parents had died and she had to face what she calls the “junk” that had found its way into the basement of the family home. Stewart’s parents weren’t hoarders or untidy; they—like many of us in affluent societies—just had an excess of things and when those things didn’t have a clear place they were “put in the basement.” Tasked with an accounting of a lifetime of this junk, Stewart decided to research “the lure of things you don’t need but could trick yourself into believing you do.”

So begins a thorough reporting from the frontlines of junk culture with outposts ranging from “a giant 250-mile-long junk-a-palooza known as the Highway 411 Yard Sale” to junk-removal service providers who have seen just about everything when it comes to the detritus of human life, to a variety of people making money, art, or a living commenting on junk, like Brent Montgomery, the executive producer of Pawn Stars, a popular History Channel show that documents pawn culture.

In a fascinating chapter, Stewart even talks to a former NASA scientist, Donald Kessler, about the problem of space junk—according to NASA, the “man-made objects in orbit about the Earth, which no longer serve a useful purpose.” All of the stuff left over after launches just continues to travel in space. It’s already at a “critical density” point and this debris could cause problems with, for example, satellites that control “GPS and weather monitoring systems.”

All is not dire in Stewart’s reporting. She also documents the tiny house, upcycling, and freecycling movements—all reactions against relying on landfills. An enlightening book,  Junk helps us rethink the relationships we have to the objects we covet, buy, keep (for a while anyway), but almost always eventually throw out.