Our emotional relationship with clothes 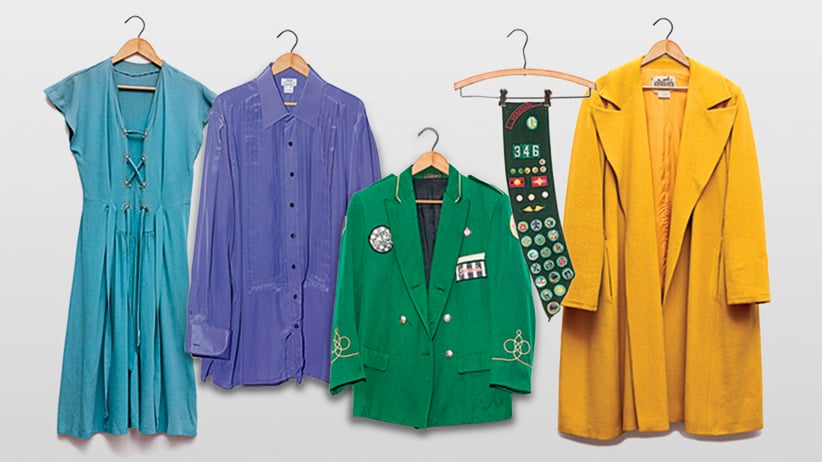 A decade ago, the appearance of a chronic illness changed my relationship to everything in my life. As much as anything else, it changed my relationship to clothes. I love clothes. I have never thought personal style to be a frivolous pursuit, but rather, something that tells us a lot about who we are and why we are that way. You’d never catch me walking down a street in sweats.

Then, suddenly, I was wobbling around in much worse: It was sweatpants, a veal-coloured elasticated brace, a fibreglass cane, and disgraceful, pneumatic orthopaedic shoes. There were days when I would catch a reflection of myself in a shop window and, for a split second, think I was seeing an old woman I should run to and help. My life was barely in my hands. And yet, I spent a surprising amount of time thinking about my shoes. Mainly, I thought about how I hated my new shoes and loved my old ones, about how, if I got better, I would buy the thinnest-soled ballerina flats, and that would be my prize. That would be the sign that not just life, but my life, had been returned to me.

Ten years later, a decent portion of my former mobility—and my former shoe collection—is again available to me. My look has adapted (although I have an alternative, much more lovely wardrobe, both in reality and in my mind’s eye: what I would wear to the library or on my errands if I didn’t so often need to have jogging sneakers on my feet). The decade-old memory, though, of how being badly dressed made me feel like less myself than even death-baiting illness did, has been transformational. It made me see that all clothing—even elasticated medical corsets—are, in a fashion, fashion.

In a way, this epiphany—which sounds so simple as to be idiotic—brought me in line with some of the newer and, it must be said, fashionable thinking about clothing. It is not so fashionable to be head-over-heels into fashion now; it hasn’t been since the early 1990s. It is better to be into style. It is the shmatte version of “spiritual, not religious.” Nobody wants to be seen as religious. The Internet has, over the last decade, ripped the supremacy out of entities like Vogue, replacing editorial didacticism with something much more personal, dialogue-based and open-ended. The street fashion shot by The Sartorialist, Scott Schuman, and the stylish, often kooky old ladies photographed by Ari Seth Cohen for his blog Advanced Style, anticipated this ethos of appreciation for the interesting over the merely beautiful, the subtle qualities of age over the sheen of the new-new-new.

This season, words finally catch up to images. It was the lameness in fashion books that led Toronto author Sheila Heti to come up with the idea for her new, gigantic book about dressing, Women in Clothes, produced in collaboration with author and illustrator Leanne Shapton and the author Heidi Julavits, who is also a founder of The Believer magazine. Heti writes that she’d always had an indifferent relationship to clothing, and then began living with a man who cared about clothes: “I had never, up close, seen what that looks like. I’d always assumed the well-dressed just happened to be that way—not that it was an area of life people excelled in because they applied thought, attention and care to it . . . One day, I just decided: Today is the day I’m going to figure out how to dress.”

Ever the bookworm, Heti—author of 2012’s truly genre-busting How Should a Person Be? A Novel from Life— took herself to a bookstore instead of a department store, and found only “books about Audrey Hepburn or books filled with pictures from Vogue . . . I thought: I’ll have to make this a project. I decided to begin by asking some of the women I knew the very questions I’d hoped to find answered in a book.” The quest seems to be a kind of de-pedestalization. Her questions included: “Is there a dressing thing you wish women would stop doing?” and “What are some dressing rules that you wouldn’t necessarily recommend to others, but which you follow?” The seeds of these queries turned into a shape-shifting bolus of a book, a text-heavy mix of interviews, essays, surveys, lists, art and how-to guides, which, astoundingly, includes contributions from more than 600 women.

Clearly, in its making, this handsome book took on a life of its own. Women in Clothes is full of small gifts; a highlight is a memoir by Julavits about a brown and yellow mitten that went missing and her increasingly perplexing, even humiliating, obsession to find it. Though, I don’t know if the end result does justice to the book’s humble root question: “Dressing: How do you do it?” A problem may be that such a question attracts experts, and capital-E experts in style may be the very types you get the feeling Heti, Shapton and Julavits were originally trying to get away from in crafting their book. So it can sometimes feel like crashing an elite party attended by those who deeply understand the value of vintage Comme des Garçons and also that a new $1,200 Isabelle Marant dress is nothing to boast about: women who specialize in the kind of covert, “Oh, this old thing?” glamour that is, among the beautiful people, most admired these days. So this is a connoisseur’s book; a confirmation for those who already know—or are very, very close to knowing—that if it’s only Isabelle Marant, you might do well to cut out the tag so that it could be confused for something more intriguing.

In Worn Stories, the Brooklyn-based writer and editor Emily Spivack may get at something more universal. Spivack created the Smithsonian’s Threaded blog and the online project Sentimental Value, where she collected the stories behind second-hand things being sold on eBay. Her latest project collects the narratives behind single, evocative garments or accessories from a wide range of people—tattoo artists, former soldiers, handymen, and more famous names, including artist Marina Abramovic, actress Greta Gerwig and country singer Rosanne Cash. In one piece, a washed-up game-show announcer opens his heart about a red tuxedo jacket, his former costume. You get the impression he’d wanted to talk about this red jacket since his last show was cancelled in the ’80s. One story, given by a Queens-born lawyer named Ross Intelisano, made me cry: He tells of the neckties made by his Sicilian grandmother that were flapping in the wind after hurricane Sandy took a giant bite out of his childhood home, leaving his father’s closet exposed to the world.

A stitch that connects all of these books is that clothes are storytellers that reveal their richness through time and memory. To think of clothes as just fashion is missing most of the life in their fabric. It is an idea that runs counter to everything our era of dress will be most remembered for: fast fashion, cheap sweatshop labour, seasons of style being diced into ever smaller segments to keep consumers buying year-round, rather than what was once traditional: a couple of times a year.

The Toronto-based illustrator Sarah Lazarovic takes her own chisel to this norm in the upcoming A Bunch of Pretty Things I Did Not Buy. Based on a soulful online visual essay of the same name, where Lazarovic drew and painted the clothes she desired for a full year, instead of buying them, her book expands on the idea of not consuming fashionable items while being consumed by wanting to consume fashionable items. Next to a summer dress with a cross-strap bodice, she writes of the kind of hedonic pre-consumption that most of us can recognize: “Every once in a while, my rules bug the hell out of me. I see a dress that makes me imagine the million lives I could lead in it. I worry I’ll never see something so perfect again.” Her advice: Wait until the craving passes, or until something you have comes back into fashion. As all stylish women know, eventually, absolutely everything does. This season, fashion magazines are showing pencil skirts and peg-legged dress pants with pneumatic-looking jogging sneakers. Years ago, I’d have rejoiced. I’d like to think that these days it no longer matters to me.