Our latest e-book: The Queen 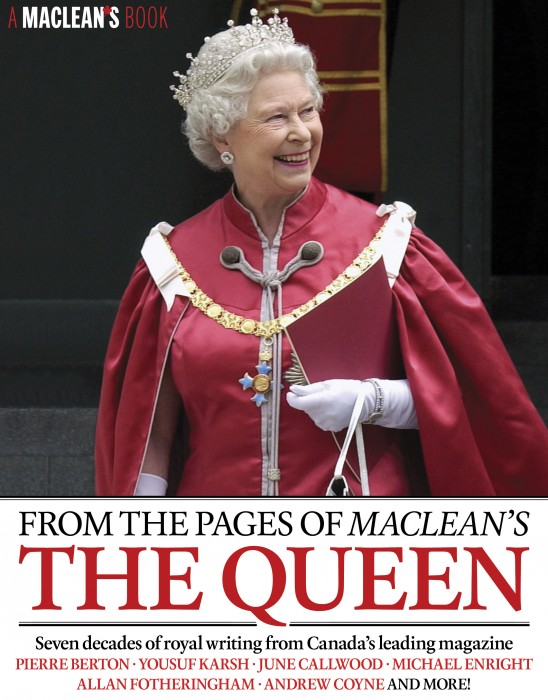 Her Majesty Queen Elizabeth II has been on the throne for 60 years but Maclean’s has been fascinated with her since long before she wore the crown. Our latest e-book, on the occasion of the Queen’s Diamond Jubilee, compiles the best of our royal coverage over the last seven decades from some of Canada’s most famous writers and photographers. Berton wrote a seven-part series in 1953, the year after George VI died and Elizabeth became Queen. (One of those articles, “How the princess was taught to rule,” is included in this collection; the others will be released in a special ebook, Pierre Berton on the Queen). Photographer Yousuf Karsh gave an account of his 1951 trip to Clarence House to shoot the young family. And more recently, Andrew Coyne explained why Canada needs the monarchy—even if it’s Charles and Camilla.

It was no easy task compiling this collection. Fourteen of the 23 stories only exist in bound copies. And our seemingly endless poring over them, and the resulting wear and tear, sent Maclean’s resident archivist, and author of our Royal Quarters blog, Patricia Treble into a sweat. We sat down with her to find out how she got the originals back in their locked cabinets, what her favourite stories about Elizabeth are and what royal has visited Canada the most (the answer may surprise some).

Buy the book: Kindle | iBooks | Get the Maclean’s App

Q: So you had to go through the locked archive cabinets in the Maclean’s library to retrieve some of these stories?

A: I had to go through bound volume by bound volume. The first thing I did was find out how many times she was on the cover. We had no clue. The total turned out to be 14. I started at the present day and went backward.  You’re looking through these big old bound volumes—and they’re just huge because Maclean’s was massive at the time—and you’re flipping over each page looking for the covers and then all of a sudden you’ll see her. You see the ones where she’s wearing the 1980s clothes, including the little Greek sailor hat, which is looks just horrid today but was of the time, and then you find all the different stories. We have an old card catalogue that’s very authoritative, but not exhaustive, on all the articles too.

Q: When do you really start to see stories about Elizabeth popping up?

A: The first ones exclusively on her and not the royal family are from 1944 when she turned 18, when she came of age. Obviously there were stories written on her father’s coronation in 1937, but she was just part of it. And then they started accelerating in 1947, of course, when she became engaged and married Philip. And then the children were coming. We even have the original cover art from her first 1951 tour of Canada in our office.

Q: What does that mean?

A: The magazine used to commission artists to do cover art back then. So it’s a painting by Franklin Arbuckle of Princess Elizabeth and Philip waving from of a train. The original painting is hanging outside our library. The other royal one we have is from her 1953 coronation. It’s amazing how there’s been a very long relationship: even when Maclean’s wasn’t a news magazine, we were doing lots of stories on the monarchy. 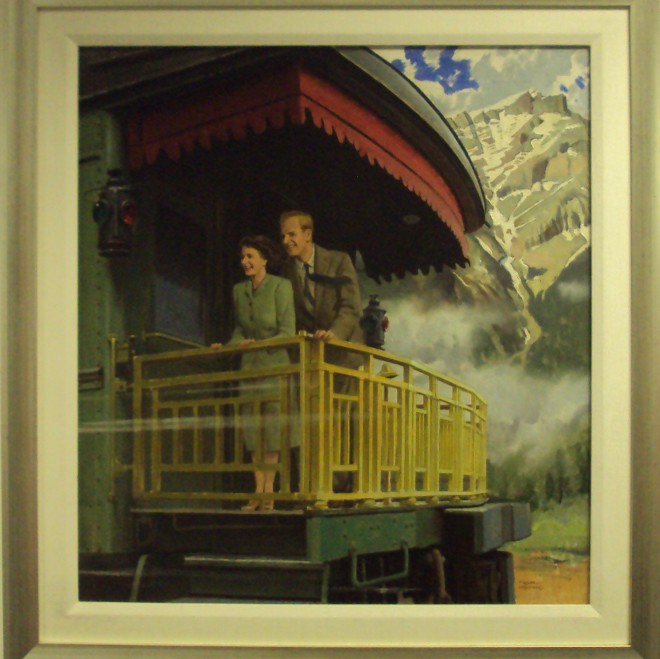 Q: What were we before we became a news magazine?

A: We were just a a general interest magazine, like Atlantic or Harper’s. And the same people that wrote for them wrote for us. It was only in the mid-70s that we became a news magazine; first a biweekly and then a weekly. Elizabeth started coming to Canada in 1951 and we did something on almost every trip—either the lead up or the trip itself. For one of them, the 1959 trip, we simply just have the official portrait, with no stories. And that was actually the most extensive tour she’s ever given anywhere. I think it went on for 45 days. She went from coast to coast, and amazingly she was pregnant at the time and nobody knew.

A: With Andrew. Nobody in Canada knew but they had to very quickly send back for more dresses. Maybe that’s why Andrew has such a close affection to Canada. So when you look over the generations of writers—we have everyone from Pierre Berton to June Callwood and we even have Andrew Coyne, who is an amazing monarchist—you can see the reverence, the deference is really gone. People are far more critical about the monarchy, which I think is the way it should be. You should analyse it. But there’s also this sense of magic—that this is the Crown in Canada. And what really comes through is that she really likes coming here.  At the start of her last visit, which we covered in our magazine, she said, “It’s good to be home,” and you know she meant it. She’s been to more places in this country than virtually any Canadian. She’s been to every province and territory. In fact, she was very determined to be the first member of the royal family to go to Nunavut after it became independent in 1999. And sure enough she went there in her Golden Jubilee trip of 2002!

Q: Was there a story in the e-book that appealed to you the most?

A: I loved June Callwood’s take on the Queen’s visit in 1957. It was a really short visit but she captured it so well. The ones that I was really interested in, although they’re the most critical, are the ones from 1992. The royal family was in crisis and there are really strong, analytical pieces by Andrew Phillips, then our London bureau chief, covering all the troubles that were enveloping the royal family. They were in the seventh circle of hell–she said it was her annus horribilis. You can see how much has changed in 20 years.

A: One interesting thing is that members of the royal family are coming more and more frequently. I crunched the numbers: the Queen has come 23 times. She’s been to Canada more than any other realm country. But the most frequent visitor is Prince Philip! He’s been here 45 times.

A: Exactly. Let’s face it, travel is easier now. And I think that’s the other change you see in these articles: the trips used to be long, big trips because it was harder to get here.

Q: Did it break your heart to have to open up some of those fragile bound volumes?

A: [laughing] Some of them are really quite fragile. What they did at the time was bind each year’s issues, or often each half year, into one bound volume. The paper used in the 1950s and 1960s was just terrible–it’s literally crumbling.

A: They’re in perfect shape because they changed the paper and the inks in the ’50s. It was simply the quality they used that caused them to deteriorate so quickly. So you open up the ’50s volumes very gingerly. Sometimes the covers for specific issues are long gone. I was fearful, but I knew they would survive, although they’re a little shopworn. We’ll have to figure out a better system next time around.