Why humans are so obsessed with time

Simon Garfield examines how railways and wars, among other factors, have fed our dependence on the ticking clock 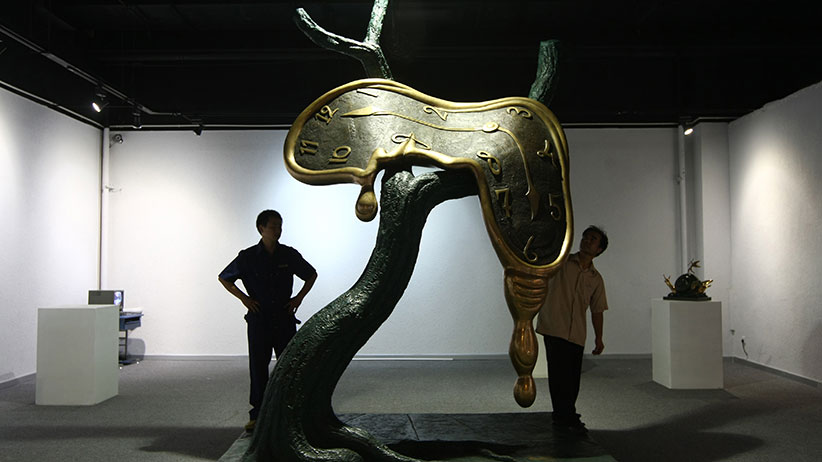 Time, as a modern-day Will Rogers might put it, is the new weather. Everybody’s talking about it constantly. According to the Oxford English Dictionary, the word itself is the noun appearing most frequently in the torrent of English-language prose that pours out daily, while “year” and “day” also make Top 5 appearances. But there is a twist on American humorist Roger’s famous punchline regarding the weather, “Nobody ever does anything about it:” humanity has been attempting to annihilate time, and its near relations distance and speed, for over two centuries. It’s just that our mind-boggling successes at that job have only made our obsession stronger. As British author Simon Garfield—whose new book, Timekeepers, is a witty and irony-laced survey of one of the burning issues of our, uh, time—says in an interview: “We are frantically engaged in trying to save time and speed up our lives all at once.”

Not that humans haven’t always felt oppressed by time’s inexorable passage. Our proverbs are certainly old enough—tempus fugit wrote Virgil succinctly 2,000 years ago. But it was the coming of the railway—and the railway timetable—that sharpened our focus. Before train travel, no one cared or, quite possibly, was even aware that different local times prevailed across Britain. Town and church clocks, by which citizens set their pocket timepieces, were tied to high noon, an ever-later moment the farther west the sun travelled. The difference was measured in minutes, and meaningless until it became a life-and-death matter to know exactly when the 9:34 express would barrel through.

London time was inflicted upon the entire island in the teeth of local resistance, with some municipal clocks, including Bristol’s, bearing two minute hands, one indicating the “real” (local) time and one showing the big-city imposition. Safety and commercial considerations swept aside the old time zones in Britain, but elsewhere in Europe, it was the military need for troop train precision that proved decisive. After the German Empire was established in 1871, notes Garfield, the kaiser’s generals successfully demanded that 16 local time zones be abolished in favour of Berlin time.

Time, railways, national defence and national prestige remained intertwined for decades. In the late 1930s, Britain and Germany even engaged in a low-key precursor to the U.S.-U.S.S.R. space race of the 1960s. When the Nazi regime decided to set a steam train speed record on a run between Hamburg and Berlin in 1936, propaganda minister Joseph Goebbels drew up the passenger list (which included Heinrich Himmler) and personally delivered the good news—124.5 m.p.h.—to Hitler. That propaganda triumph was surely on the minds of the men who designed and built the Mallard, the British train that tore through Lincolnshire two years later at 125.88 m.p.h, a steam record that remains unbroken.

All the world’s militaries, with their 24-hour clocks, become fixated on time during the 20th century’s global wars, not just on precision but on having virtually all ranks pay constant attention. The iconic image of the Victorian railway era—a conductor with one eye on the platform and the other on his pocket watch—gave way to soldiers crouched in Flanders trenches, timing assaults by more easily accessible wristwatches. The names of the two timekeepers were used in full form until the older device faded from the scene and the newer could drop the “wrist,” but the fact we long ago came to call any portable timepiece a “watch” shows how obsessed we became with the ticking hand.

And how, metaphorically speaking, obsessed we still are. Watches, especially high-end watches, have easily survived the potential threat of smartphones, which deliver the time to virtually everyone in the developed world. “Telling the time is not what watches are about anymore,” says Garfield. ”They’re now an expression of individuality and taste and, for some people, an expression of wealth and status. And also a socially acceptable way for men to wear jewelry.” That makes some observers believe that the Apple Watch—a high-status timepiece with smartphone benefits—is a stronger threat to traditional watches. Garfield isn’t so sure. “I’m pretty much Appled up in the rest of my life—phone, iPad, computer—but I don’t have the watch. They all look alike when they’re not on, even if you pimp them out to display something different when they are. You know, no matter how you slice it, the Apple Watch is still something made in a factory in China.” In short, it’s no Patek Philippe.

The military’s obsession has long since bled into the rest of society. Timekeepers moves in entrancing fashion from railways to a lively scholarly debate over just how fast to perform Beethoven’s symphonies, from the dangers of flash computer stock trading to the startling fact there have been a good two dozen major artist exhibitions devoted to the subject of time in the past 15 years, before ending up in an eye-popping chapter on the booming time-management business.

Garfield has amassed a library of self-help tomes on that topic, though he’s been unable to acquire one “that offers advice on finding enough time to read them all.” The books are full of numbers in their titles—15 secrets to productivity, 18 minutes to master your workload, find five extra hours each week—and mental exercises in their texts. Organize, organize, organize, they preach, and—solid advice for those who can afford it—hire someone to do the more boring tasks, like picking up the dry cleaning. The ultimate aim is to make time your servant rather than your master, by allowing you to gain time to . . . do more things. How that will eliminate the insistent feeling that the pace of modern life is out of control, Garfield is uncertain.

We’ve been stuck here for quite a while. A century ago, historians point out, the use-it-or-lose-it nature of war plans that promised to deliver massive armies with pinpoint precision—so long as there was no delay in issuing the order—played a key role in Europe’s tumble into war. During the first week of August 1914, the German army sent 2,150 troop trains of 54 cars each west across Cologne’s Hohenzollern Bridge—one every 10 minutes—without mishap. It was an impressive display of human chronological precision. Or—in light of how the Great War turned out for Germany—the exact opposite, proof that Ecclesiastes has always had it right: time and chance happen to us all.