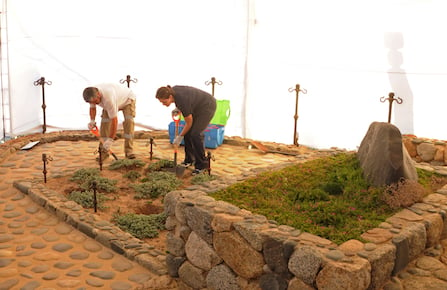 Forensic specialists dig at the grave of Nobel laureate Pablo Neruda as they prepare for the exhumation of the remains in Isla Negra, Chile, Sunday April 7, 2013. (AP Photo / Judiciary of Chile)

SANTIAGO, Chile — The body of Chilean Nobel Prize-winning poet Pablo Neruda will not be reburied this week as planned.

The press office of Chile’s judiciary said Monday that plans to rebury Neruda in his home in the coastal town of Isla Negra were suspended after members of the poet’s family and other groups asked the courts to block it so that more tests can be carried out to determine the cause of his death.

Neruda died in the chaos that followed Chile’s 1973 military coup, and his body was exhumed in 2013. Forensic test results showed no poison in his bones, and Chilean Judge Mario Carroza, who has been investigating the case, had ordered the burial on April 27.

A court of appeals must now determine if Neruda will be buried or more tests will be carried out. The judiciary says a date has not been determined.