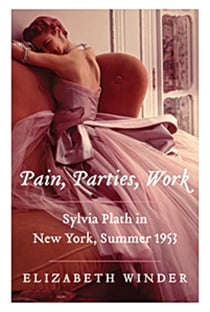 If you know almost nothing about Sylvia Plath, you likely at least know she was a troubled writer who took her own life.

It’s been 50 years since she made that final decision, and with that grim anniversary comes fresh interest in the 30 years she spent living. Pain, Parties, Work is Winder’s first book, and it offers us plenty of tidbits at odds with our perception of the author of The Bell Jar: she smelled like Prell shampoo, she once lost $3 gambling in Monte Carlo, and she wanted her children to be conceived in the ocean.

This is the Plath who, at 20, moved to New York in June 1953 to begin a guest editorship at Mademoiselle. She and 19 other sharp young ladies moved into the sweltering Barbizon Hotel for Women, eight blocks from the fashion magazine’s offices. Through journals, letters and interviews with Plath’s fellow guest eds, Pain, Parties, Work gives us an account of the whirlwind 26 days that would serve as the barely disguised opening to Plath’s only novel.

We meet Carol LeVarn, The Bell Jar’s rebellious Doreen, and Janet Wagner, Plath’s “Pollyanna Cowgirl” Betsy. (Neither is thrilled at her portrayal in the novel.) Plath was perhaps also unfairly categorized, described by Wagner as an “Ivy League snob.” She did strive to be elegant, controlled and beautiful, though; she liked to tan and dye her hair blond, and posed for Marilyn-like photographs in white bikinis on the beach.

Plath’s hotel mates don’t recall her struggling any more than they did with what was surely one of the most frustrating and false-promising periods in history for a career-minded girl. Plath kept up appearances, as one does, but the double pressure cooker of a heavy workload and fast-paced New York City meant she was increasingly unable to reconcile what was expected of her with her inner reality. Less than two months after leaving the Barbizon, the girl who had seemed to be having the time of her life tried to end it for the first time.