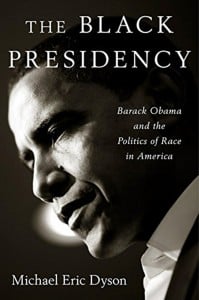 The Black Presidency: Barack Obama and the Politics of Race in America by Michael Eric Dyson. (no credit)

Is Barack Obama a black President or is he a President who is black? That is the question political analyst Michael Eric Dyson poses in his latest book, and it has serious implications for the legacy of the first African-American commander- in-chief. For make no bones about it: Dyson is casting aspersions on Obama’s authenticity as a black man and calling into questions his legacy as the embodiment of Martin Luther King Jr.’s dream.

Dyson is one of black America’s most influential figures. He is a professor of sociology at Georgetown University and author of 17 books, including the elegant, erudite April 4, 1968, about the death of Dr. King. Some critics have wondered if Dyson—who worked on Jesse Jackson’s presidential campaigns—may one day follow in Obama’s footsteps.

Dyson expresses disappointment in Obama’s race-neutral policies that fail to target the needs of ailing black people—communities ravaged by shocking rates of unemployment, home foreclosures, school suspensions, HIV/AIDS and incarceration, not to mention a murderous wave of racist police violence that gave rise to Black Lives Matter. He points out that Obama was elected with 97 per cent of the black vote, along with the millions of dollars black people scrimped together. While neglecting their needs, Dyson charges, Obama has been eager to respond to the demands of other groups: battling for immigration reform on behalf of Latinos, and repealing, for the LGBT community, the unconstitutional Don’t Ask, Don’t Tell policy.

Like Ta-Nehisi Coates, who wrote an article for The Atlantic called “How the Obama administration talks to Black America,” Dyson deplores the President’s penchant for lecturing black audiences on their moral responsibilities, while declining to confront white audiences about enduring racist attitudes. He discusses how black leaders have been frustrated by their own constituents who are protective of the President and who hesitate to make demands for fear of heightening racism against him.

Dyson’s criticisms are accurate. As are the concerns of black citizens. Witness the Republican repudiation of the President’s every effort, which the mainstream media euphemistically describes as partisanship, though it’s more often straight-ahead racism.

That said, The Black Presidency is far from a gloomy read. While this is not Dyson’s best writing, he is always insightful, and entertaining—as in his parsing of Obama’s seminal speeches for the lively tropes and devices of the black vernacular. He also isolates references to Martin Luther King in Obama’s speeches, which he claims began to diminish the closer Obama got to the Oval Office.

However, it is just that sort of snide remark that can make Dyson seem suspect. He can be unfair, as when he blames Obama for behaving coolly toward the old black guard, leaders like Jesse Jackson and especially the Rev. Jeremiah Wright, whose malicious words might have easily torpedoed Obama’s chances. It’s clear that Dyson feels a deep respect for these older leaders whom he calls the “Moses Generation” for their relationship to King. One just wishes he had a touch more compassion for the man who fulfilled the dream.