A review of Pat and Dick 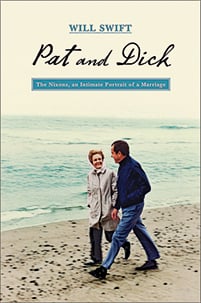 Pat and Dick: The Nixons, An Intimate Portrait of A Marriage

In 1970, writer Judith Viorst ridiculed the marriage of Richard Nixon and his wife, Pat, in the pages of the New York Times, calling the union “as dry as dust.” Newly released love letters between the former first couple show that Viorst apprehended only a portion of the story. In Pat and Dick, Swift digs all the way back to the 1930s and ’40s for this sympathetic picture of a couple deeply in love but beset by awkwardness—Dick shunned public displays of affection, unlike the Reagans who laid it on for show—and the stress that shadowed them for decades.

Swift talks to someone who still remembers being offended by Dick’s treatment of Pat at a radio station in 1945. “He flared at her like a prima donna” and “ordered her out with as little ceremony as you would a dog.” Dick was moody and snappy. Pat had perfectionist tendencies. A reporter who travelled with the Nixons recalls of Pat, “God, she made it rough for him. She would say, ‘That was a disaster,’ or ‘Well, I’ve heard you make lousy speeches, but that was the worst.’ ”

At the White House, Pat told a member of the staff, “Nobody could sleep with Dick. He wakes during the night, switches on the light, speaks into his tape recorder or takes notes, it’s impossible.” The couple kept separate bedrooms, and Dick unintentionally raised tension by assigning Bob Haldeman, who savoured his role as the “president’s son-of-a-bitch,” to deliver messages to his wife. Haldeman wrote in his diary, “The PN thing is a real problem,” and dismissively called Pat “Thelma” (her given first name) behind her back.

Yet Pat’s press secretary, Helen McCain Smith, saw a closeness others weren’t privy to, confiding to Swift that Nixon “wrote [Pat] perfectly darling notes, affectionate notes, tucked in beside her pillow. Alexander Haig believed that Dick worshipped Pat. “I knew this when I worked for him. Their relationship was not ostentatious or phony.” In a wartime love letter, Dick wrote to Pat, “I may not say much when I am with you—but all of me loves you all of the time.” The two died within a year of each other, both at age 81, she of lung cancer, he of a stroke.