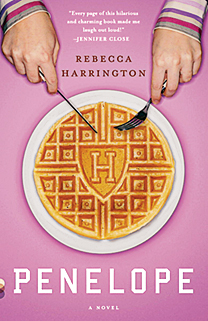 Penelope O’Shaunessy grew up in the less affluent part of Connecticut, hangs out with friends who claim Denny’s as their favourite meeting spot, and takes life lessons from books and from the shrill advice of her mother. Harvard, where she is about to attend as “an incoming freshman of average height and lank hair,” would seem the perfect place for reinvention, for making new friends, and for self-discovery. Except that’s not how it works out.

Instead, as 26-year-old Harvard and Columbia graduate Rebecca Harrington details in sly, winning form, Penelope spends much of her time bewildered by everything and flummoxed by how to behave. Her two roommates, the flighty Emma and taciturn Lan (as well as the feral, yowly cat Lan secrets away in her dorm room), remain enigmas even as Penelope tries to be friends with them. Two college boys are at different points yin to Penelope’s yang, interested in her when she isn’t interested in them and vice versa, as other girls’ more obvious charms and jealousies assert themselves in amusing fashion. Since we’re in Penelope’s head, we see how confused she is about how others act toward her, even as we understand how her own actions inadvertently reward and betray others.

What comes through most, and what makes Penelope such a good satire, is how bizarre the rarefied Ivy League world is. Precocious children evolve into hyper-intelligent beings without any sense of understanding of what they are supposed to be doing in life. Penelope thinks she’s set apart by her peers, but as she finds out late (and as the reader knows all along) everyone on campus is pretending to be people they aren’t.