Pepper: A History of the World’s Most Influential Spice 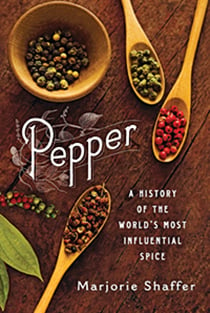 Here’s another thing you can blame on Christopher Columbus. Not only did the explorer bring colonialism to the Americas and famously misname Caribbean natives as “Indians” (thinking he’d arrived in India), he also created endless confusion in the kitchen by alleging the chili “peppers” he found there were related to the valuable spice “pepper” he was in search of. In fact the two peppers share nothing in common.

The key role played during the age of discovery by the pepper you put in a pepper grinder is the main focus of Shaffer’s book, which is being marketed as something of a companion piece to Mark Kurlansky’s popular 2002 work Salt: A World History. (With this much attention paid to dinner table fixtures, can a history of the paper napkin and its role in world affairs be far behind?)

While the dream of finding a new and faster route to the spice islands of the southeast Pacific motivated Columbus and others to set sail into the unknown, pepper alone can’t explain it all, as Shaffer occasionally acknowledges. Nutmeg and cloves were far more valuable by weight. And textiles and tea eventually became much more important to international trade. Nonetheless, pepper was, and still is, the world’s most popular spice.

Shaffer’s tale is at its best during the early years of the spice trade, when pepper-hungry European nations were not yet world superpowers. Arriving in what is now Indonesia on rickety ships with half-dead crews after year-long voyages, Western sailors often found themselves humbled before the riches of the islanders and competing with each other, as well as Chinese and Muslim traders, for a chance to bring home some pepper.

In 1601, for example, four English ships sailed to Aceh Banda, a magnificent city-state on the northern tip of Sumatra, with a hand-written letter from Queen Elizabeth I pleading that the sultan sell his pepper to her representatives, and not their competitors; the virgin queen promised “that love will flow from trade.” Full-blown colonialism was still centuries away.