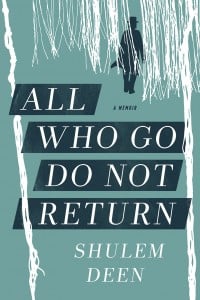 Who Go Do Not Return

When Shulem Deen and Gitty Goldstein got married, they had met once and spoken with each other for less than 15 minutes. Their wedding night required an emergency 4:30 a.m. phone call to a rabbi for clarification on how to consummate a marriage. When Goldstein became pregnant with their first child, Deen wondered about how women gave birth and Goldstein was equally perplexed: “I don’t know,” she said. “You don’t think it requires surgery, do you?”

For Deen and Goldstein, these lapses in knowledge were part of life in the Skverer community, a particularly conservative and insular sect of Hasidic Judaism, and they mattered little given the absolute certainty their faith offered when it came to life’s biggest questions. It’s only as that certainty faded into a crisis of faith that Deen began to find the restrictions unbearable and absurd, a trajectory he recounts in his memoir.

The book opens shortly after the Skverers have expelled Deen for heresy. It circles back to recount his childhood in Brooklyn, his youthful rebellions against Judaism, his settlement into the Skverer community, and his eventual rupture with religion, which begins innocently enough with a few listens to the radio here, a few trips to the library there. Most of all, it’s the endless information and lively chat rooms Deen finds on the Internet that push him to question the faith and principles he was raised to uphold.

Deen’s dalliances with the outside world make it increasingly hard for him to justify the closed-off Skverer community—its intolerances and stridently anti-modern attitudes. Deen’s skepticism, once it blossoms, grows into the foundation for a new way of life. That fact is most evident toward the end of All Who Go Do Not Return, when Deen has completely given up his religious life. His writing at this point vacillates between recognizing the necessity of his decision and missing the community that he lost as a result, between relishing the richness of his new life and living with the inconsolable pain of having been separated from his children

To the end, Deen searches for a new kind of faith to guide him into the future and also to help him make sense of his past choices. But a resounding lesson of his book is that once doubt creeps into your life, certainty never returns.