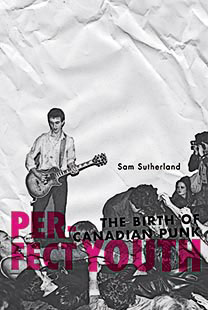 The world does not need another book about punk rock, full of self-righteous mythmaking, railing against mainstream culture and grossly exaggerating the importance of a three-chord song played with youthful fury in 1977. What the world does need, however, is this particular book. Canadian music of any genre rarely gets mythologized; rarer still is it done as well as it is here. Sam Sutherland strikes the balance between an enthusiastic fanboy, a meticulous researcher and a masterful magazine writer; each of his chapters conveys maximum information in minimum time—with plenty of vomit, violence, electrocution and decidedly dangerous characters to fuel the narrative—and dispels the myth of a conformist Canada drowning in dreadfully dull culture.

Sutherland also does what so many Canadian cultural histories fail to do: document scenes in every province without coming across as tokenistic. You think it was hard to be a punk in Toronto, Montreal or Vancouver in the ’70s? Try Edmonton or Fredericton or Meat Cove, N.S.; those stories are often more entertaining for their sheer absurdity. The country’s biggest punk names (D.O.A., Pointed Sticks, Teenage Head, Viletones) all get their due, but they’re never the whole story; Sutherland also points readers toward other essential books to flesh out the narrative, such as Liz Worth’s Treat Me Like Dirt. Now-unlikely players like k.d. lang’s manager, Larry Wanagas, and Liberal party attack dog Warren Kinsella are also paid respect.

Far too many rock books cop out with oral histories; Sutherland plays up his strength as a storyteller without ever seeming desperate to impress with academic analogies. Even if you’re a reader who will never track down the music discussed here, even if you’re tired of hearing 50-year-old rounders at the bar waxing nostalgic about their punk-rock past, Perfect Youth is still a fascinating read about making something out of absolutely nothing. It’s a crucial contribution to our cultural history.